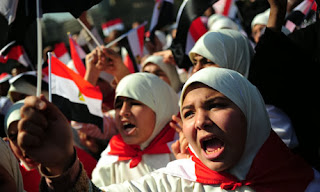 Egypt scored badly in almost all categories.
Women played a central role in the country's revolution but activists say the rising influence of Islamists, culminating in the election of Muslim Brotherhood leader Mohamed Mursi as president, was a major setback for women's rights.
Mursi was toppled in a military takeover in July after mass protests against his rule, but hopes for greater freedoms have been tempered by the daily dangers facing women on the street, experts said.
A U.N. report on women in April said 99.3 percent of women and girls are subjected to sexual harassment in Egypt, which some analysts say reflects a general rise in violence in Egyptian society over the past half-decade.
Human Rights Watch reported that 91 women were raped or sexually assaulted in public in Tahrir Square in June as anti-Mursi protests heated up.
"The social acceptability of everyday sexual harassment affects every woman in Egypt regardless of age, professional or socio-economic background, marriage status, dress or behavior,” said Noora Flinkman, communications manager at HarassMap, a Cairo-based rights group that campaigns against harassment.
“It limits women’s participation in public life. It affects their safety and security, their sense of worth, self-confidence and health.”
Respondents also cited high rates of forced marriage and trafficking.
“There are whole villages on the outskirts of Cairo and elsewhere where the bulk of economic activity is based on trafficking in women and forced marriages,” said Zahra Radwan, Middle East and North Africa programme officer for the Global Fund for Women, a U.S.-based rights group.
Female genital mutilation is endemic in Egypt, where 91 percent of women and girls - 27.2 million in all - are subjected to cutting, according to UNICEF. Only Djibouti has a higher rate, with 93 percent of women and girls cut.