The Age of Jahillya continues... 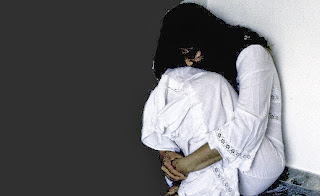 A woman was divorced on Sunday shortly after she returned home after giving birth to a baby girl. This was her third daughter.
Ghulam Muhammadabad police said Tabassum Bibi, a resident of Usman Ghani Town, Faisalabad, married Muhammad Aamir six years ago. She said her husband and refused to let her in saying he had wanted a son. She said some relatives had intervened and convinced him to let her return home.
She said when she got pregnant the third time, he had threatened to kill the child if it was a girl.
She said he had taken her to several pirs and asked them to give her amulets so that they would have a son.
She said on Sunday she was taken to a hospital in labour. She said he did not accompany her and was informed through phone that she had had a baby girl.
She said when she returned a few hours later, he divorced her on the gate and refused to let her in.
She said he told him to take the children with her. Tabassum Bibi said her parents had refused to take her back, and so she had shifted to her aunt’s house. She said she had no idea where she would go since she could not stay at her aunt’s house all her life.