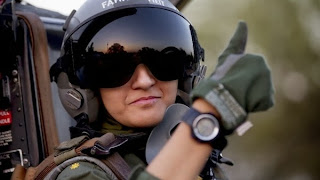 With an olive green head scarf poking out from her helmet, Ayesha Farooq flashes a cheeky grin when asked if it is lonely being the only war-ready female fighter pilot in the Islamic republic of Pakistan.Farooq, from Punjab province’s historic city of Bahawalpur, is one of 19 women who have become pilots in the Pakistan Air Force over the last decade - there are five other female fighter pilots, but they have yet to take the final tests to qualify for combat.“I don’t feel any different. We do the same activities, the same precision bombing,” the soft-spoken 26-year-old said of her male colleagues at Mushaf base in north Pakistan, where neatly piled warheads sit in sweltering 50 degree Celsius heat (122 F).A growing number of women have joined Pakistan’s defense forces in recent years as attitudes towards women change.“Because of terrorism and our geographical location it’s very important that we stay on our toes,” said Farooq, referring to Taliban militancy and a sharp rise in sectarian violence.Deteriorating security in neighboring Afghanistan, where U.S.-led troops are preparing to leave by the end of next year, and an uneasy relationship with arch rival India to the east add to the mix.
Farooq, whose slim frame offers a study in contrast with her burly male colleagues, was at loggerheads with her widowed and uneducated mother seven years ago when she said she wanted to join the air force.“In our society most girls don’t even think about doing such things as flying an aircraft,” she said.Family pressure against the traditionally male domain of the armed forces dissuaded other women from taking the next step to become combat ready, air force officials said. They fly slower aircraft instead, ferrying troops and equipment around the nuclear-armed country of 180 million.

“Less of a taboo”

Centuries-old rule in the tribal belt area along the border with Afghanistan, where rape, mutilation and the killing of women are ordered to mete out justice, underlines conservative Pakistan’s failures in protecting women’s rights.But women are becoming more aware of those rights and signing up with the air force is about as empowering as it gets.“More and more ladies are joining now,” said Nasim Abbas, Wing Commander of Squadron 20, made up of 25 pilots, including Farooq, who fly Chinese-made F-7PG fighter jets.“It’s seen as less of a taboo. There’s been a shift in the nation’s, the society’s, way of thinking,” Abbas told Reuters on the base in Punjab’s Sargodha district, about 280 km (175 miles)east of the capital Islamabad, home base to many jets in the1965 and 1971 wars with India.There are now about 4,000 women in Pakistan’s armed forces, largely confined to desk jobs and medical work.But over the last decade, women have become sky marshals, defending Pakistan’s commercial liners against insurgent attacks, and a select few are serving in the elite anti-terrorist force. Like most female soldiers in the world, Pakistani women are still banned from ground combat.Pakistan now has 316 women in the air force compared to around 100 five years ago, Abbas said.“In Pakistan, it’s very important to defend our front lines because of terrorism and it’s very important for everyone to be part of it,” said avionics engineer Anam Hassan, 24, as she set out for work on an F-16 fighter aircraft, her thick black hair tucked under a baseball cap.“It just took a while for the air force to accept this.”
Source
Posted by Zafar Khan at 09:00