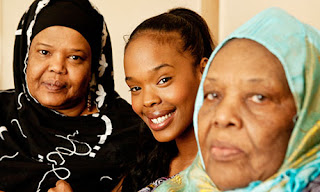 For Samira, the very idea of this kind of mutilation is incomprehensible. Brought up in London, she was working as a model when she was approached by BBC3 to present a documentary about Somalia. Visiting the war-torn country, she met women who planned to have their daughters cut and saw a six-year-old girl who had been recently subjected to FGM. "I just didn't understand how a mother who had gone through this pain could have it done to her children. I don't blame the women, I blame the society that doesn't stop it."
Since the film came out last year, Samira has been touring schools withSave the Children to highlight issues facing Somalia. "One thing I have learned is that while people may say we are moving on, it still continues."
According to Forward, a leading UK charity that campaigns to end FGM, the practice takes place in many cultures and occurs in several different religious communities. However, mainstream spiritual leaders have denied that the practice stems from religion. Samira believes the desire to control women's sexuality lies behind it.
"I think women here are scared their daughters will become too westernised and not get married – that they will have boyfriends and go out, and this is why they have it done."
Yet the subject, she says, is rarely discussed. "I go into schools with a high number of Somali girls, and they always seem shocked that it is part of our history and culture. We need women to talk about their experiences, men to talk about their marital experiences, clerics to explain it is not linked to religion and doctors to talk about the problems it causes. Then things will change – when we discuss what FGM is really doing."