Gender Relations in the Prophet’s Society 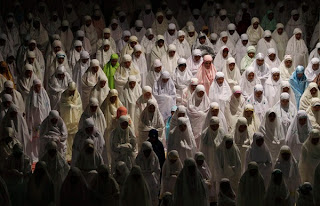 Excellent article by Maryam Amirebrahimi on Gender relations at the time of the Prohet (saw) Alhamdulilah everyone needs to know these facts and the Sunnah of male/female cooperation and interaction. In my experience far too many men think banishing women from the mosque (and the public sphere as a whole) is somehow Sunnah...How wrong they are!

Ibn Abbas radi allahu `anhu (may God be pleased with him) shares with us, “A beautiful woman, from among the most beautiful of women, used to pray behind the Prophet ﷺ. Some of the people used to go to pray in the first row to ensure they would not be able to see her. Others would pray in the last row of the men, and they would look from underneath their armpits to see her. Because of this act, in regard to her, Allah revealed, “Verily We know the eager among you to be first, and verily We know the eager among you to be behind,” (Qur’an 15:24).
From this narration, we learn that the young men who lived in the very city and attended the very masjid of the Prophet of God ﷺ slipped and checked a girl out. And yet what did the Prophet ﷺ do about it?
Did he create a wall between the men and women’s sections? Nope. Did he prohibit women from going to the mosque, lest they tempt the men who attend? Never. In fact, he ﷺ did the exact opposite and commanded that women not be stopped from going to the House of God.
What he did do was allow men and woman to continue to be a part of the same society, working together as a community, existing cohesively. At the same time, he ﷺ helped train his community to keep their desires in check.


For the rest of the article see here.
Posted by Zafar Khan at 09:00