Fatima Al-Fihri – Founder of the Oldest University in the World 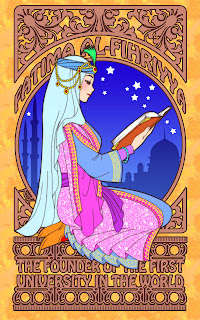 It was a clear sunny day when a noble family journeyed from Kairouan, Tunisia to Fes in Morocco. It was in the early ninth century and many families chose to migrate to the bustling city in the west. For Mohammed Al-Fihri, a wealthy merchant from Tunisia, Fes was excellent avenue for him to continue the family business.
Both his daughters, Fatima and Mariam were well educated. After inheriting a large amount of money from their father, the girls vowed to spend their entire inheritance for the benefit of their community. Whilst Mariam headed the contstruction of the grand mosque Al-Andalus, Fatima planned on the building of another mosque called Al Karaouine which was said to be the largest in North Africa. It was in the midst of the construction of the mosque that the University of Al-Karaouine ( which is still part of the mosque today) was set up.
The University of Al-Karaouine was highly regarded back then as one of the leading spiritual and educational centers of the Muslim world. Today, the Guinness Book of World Records has recognised it to be the oldest continuously operating institution of higher learning in the world.
Fatima Al-Fihri was certainly a lady of foresightedness for the location of the university within the compounds of the mosque attracted scholars from far and wide. Fes, being the most influential cities in the Muslim world has been renowned for centuries as the centre for religion and culture. The university produced great thinkers such as Abu Al-Abbas al-Zwawi, Abu Madhab Al-Fasi, a leading theorist of the Maliki school of Islamic jurisprudence and Leo Africanus, a renowed traveler and writer.
That was not all, the unviersity played a leading role in cultural and academic relations between the Islamic world and Europe. A renowned Jewish philosopher and theologian Maimonides (Ibn Maimun) studied under Abdul Arab Ibn Muwashah. Apart from that, Ibn al-Arabi Ibn Khaldun and Al-Bitruji (Alpetragius) were all connected with the university either as academicians or as students.
As time went by, the university gained the patronage of politically powerful sultans. It compiled a large selection of manuscripts that are currently kept guarded in the library. Among those manuscripts are volumes from the famous Al-Muwatta of Malik written on gazelle parchment, the Sirat Ibn Ishaq, a copy of the Qur’an given to the university by Sultan Ahmad al-Mansur in 1602, and the original copy of Ibn Khaldun’s book Al-’Ibar.
Alongside the Qur’an and Fiqh (Islamic jurisprudence), other subjects that were also taught were grammar, medicine, mathematics, astronomy, chemistry, history, geography and music. Gradually, a broader range of subjects were introduced in the university particularly natural sciences, physics and foreign languages.
Today, Fatima Al-Fihri is highly respected and looked upon by Moroccan women for her wisdom, perserverances and kind heartedness. It was her personal sacrifice that has made her to be an inspiration to all women. Even today, young Moroccan ladies speak greatly of their foremother who not only brought fame to Fes but has carved a name for being the only Muslimah who has built the oldest university which is still running today.
The Qur’an and the Hadith (teachings of the Prophet) inspires every man and woman to seek knowledge. This unique story of Fatima Al- Fihri has shed some light on the role and contribution of Muslim women to Islamic civilisation- It is this role which will hopefully denounce the narrow-mindedness of the western mind of Muslim women. Fatima has shown to us that even in the early centuries that women who are shrouded with the veil are just as willfull and intelligent as those of us today.