Comment: Worry about your rank and standing with the Almighty, 'your Highness' not Forbes!! ps. Also why would you help the arch-enemy of Muslims Rupert Murdoch make more money to produce more propaganda against us. Too many Saudis are enemies of the Ummah! 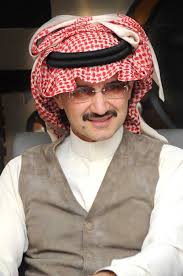 The Prince is not pleased. Alwaleed bin Talal, a grandson of Saudi Arabia’s founder, King Abdulaziz bin Saud, and nephew of the current monarch, King Abdullah, has publicly severed ties with Forbes magazine after a spat over how the American magazine estimated his wealth.


At $20bn, the Forbes annual billionaires’ list, ranks Prince Alwaleed at a respectable No 26. But the Prince, whose Kingdom Holding Company has stakes in everything from Rupert Murdoch’s News Corp to Citigroup, says he is worth a lot more. Prince Alwaleed puts his own wealth at nearly $10bn higher than Forbes’s estimate, a figure which, if accurate, would catapult him over the heads of the Google founders Sergey Brin and Larry Page, the New York Mayor Michael Bloomberg and the LVMH boss Bernard Arnault into the top 10 wealthiest people on the planet.

“Prince Alwaleed has taken this step as he felt he could no longer participate in a process which resulted in the use of incorrect data and seemed designed to disadvantage Middle Eastern investors and institutions,” the Saudi royal’s office said in a statement.
Unimpressed with his Forbes ranking, the Prince will instead work with a rival rich list compiled by Bloomberg, which last ranked him at the world’s 16th-richest person. The Bloomberg list estimates his wealth at $28bn.

“We have worked very openly with the Forbes team over the years and have on multiple occasions pointed out problems with their methodology that need correction,” Shadi Sanbar, the finance chief of Kingdom Holdings, said. “However, after several years of our efforts to correct mistakes falling on deaf ears, we have decided that Forbes has no intention of improving the accuracy of their valuation of our holdings and we have made the decision to move on.”

The magazine, however, has refused to budge. In a piece published on its website entitled “Why Prince Alwaleed’s wealth numbers just don’t add up”, Kerry Dolan recounted how Mr Sanbar attacked Forbes reporters and its methodology before the annual list was published. “Why does Forbes apply different standards to different billionaires – does that depend on national origin?” he is reported to have asked.
The Prince, the magazine claimed, has long accorded “paramount priority” to its widely followed rich list. “That list is how he wants the world to judge his success or his stature,” an unnamed former lieutenant was quoted as saying. “It’s a very big thing for him.”

Among the Prince’s bones of contention with Forbes was its “sudden refusal after six years to accept share values as listed by the Tadawul [the Saudi stock exchange]... The application of differing standards of proof for different individuals resulting in an arbitrary set of standards that seems biased against the Middle East,” Kingdom Holdings said in the statement. “For example, the valuations of other emerging markets such as the Mexican stock exchange are accepted while those of the Tadawul are not.”