“I made it possible for my father to buy new wives” 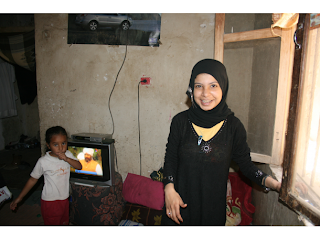 She escaped from her husband. Ran to court. Got a divorce. All at the age of 10. Publishing her memoirs, Nujood Ali from Yemen began to break down barriers. Five years on, we visit Nujood to see how she is getting on. Her life, it seems, has only gone from really bad to less bad.
BY RNW correspondent Judith Spiegel, in the Yemeni capital Sana'a
The house I enter is dark and small. I am in Al Hasabah, an area of Sana’a where heavy fighting took place between government troops and tribesmen in the spring of 2011. On the bare concrete floor are some dirty mattresses and a jerry can with water. A wire without a light bulb hangs from the ceiling. The only decoration in the four square meter room is a poster of a car and one with Quranic verses.
I am confused. I was supposed to meet a girl rich by Yemeni standards. In the media Nujood was portrayed as a happy middle class girl, going to a private school, wanting to become a lawyer. My thoughts are interrupted when Nujood steps out of the darkness, wearing her best dress.
Fled the fighting“I do not go to school anymore, maybe next year,” Nujood says with an apologetic look. “We had to flee during the war and ever since I didn’t go back to school. I do not live in my own house anymore, because my father lives there. He used to beat me, I cannot live with him.” His third wife kicked her out of the house that Nujood actually owns. It was bought for her with the help of the publisher of her book.
Nujood’s book did well. But she is not the one who has benefited. Nujood explains: “My father gets a monthly salary, I think it comes from the publisher, but I am not sure. He gives me only 50 dollars a month, sometimes I get nothing.” Suddenly she realises: “I made it possible for him to buy new wives.”
No new lawA law to impose a minimum age for marriages, for both girls and boys, never made it through the Yemeni parliament. Religious scholars and other arties intervened to prevent it. Fathers in Yemen can still marry their daughters off as young as eight or nine.
Bad advertising
The Yemeni authorities have twice denied Nujood permission to travel. Both times she had been invited abroad to receive an award. But the government clearly feels the story of a nine-year old child bride is one better not told to the world. More bad advertising for a country that still ranks at the bottom of the list when it comes to gender equality.
Nujood is not angry, for her this is life. She used to dream of becoming a lawyer, of travelling, of getting scholarships. It did not happen. But Nujood tries to see things positively: “After the book we had a house and food.” Nujood gives me one of her sweet smiles again. She touches my hand, shows me her black nail polish and wants to be in a photo.
Never everThe 13 or 14 year old (Nujood is not sure), is no longer married to a much older man who raped and beat her. She still hopes to go back to school, but does not seem very sure she will. And how about marriage, will she ever get married again? “Never ever ever ever!”
The publisher has not responded to a request for information about why the book revenues are not paid directly to Nujood and whether anyone is monitoring the situation. Source
Posted by Zafar Khan at 09:30