What Is Going On With "The Land of The Pure"? 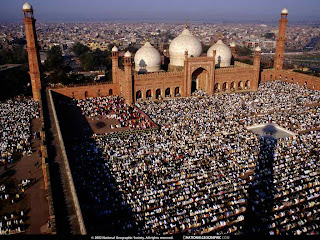 As the morning sun rose, the archway above the door projected a crescent shape onto the side wall almost in unison to the morning call to prayer that began to echo across the colony in which my aunt lived. It was as if the sound of the call was chasing the image of the crescent, both looking to rise, both delivering reassurance. If the two flights of comfort and luxury muffed by the flu that carried me were not sufficient proof, this was. I was here, I had arrived: I was in Pakistan.

The last trip to my parents birthplace was more than five years ago. Then a brief encounter with an old family friend from New Jersey who had come in search of a bride, had fallen in love at first sight, and married her all within a two week period proved that there was something magical about the land. It was then of no coincidence that my return to the country was to share in the joy of a cousin’s wedding.

Culturally differences were apparent from the start. My love of photography meant that along with my other camera snapping cousins – of whom there were many – I managed to catch quite a few good photos of the wedding festivities. However on the second night I asked the bride ‘why she wasn’t smiling’ as she sat, scarf on head, looking down. This all led to a complaint from her side of the family to my side of the family and I had become the ‘annoying westerner’.

My first ‘real’ Pakistani wedding for many years was thus an eye opener to what I found to be an obscure custom. I don’t for a moment imagine Prophet Muhammad’s wife, Khadijah, sitting like that, raised on a pedestal while family and friends gaze at her like an object to be viewed and admired from afar.

But a culture and a tradition are just that, and while alien to me, it was the way they wanted it. So I pray that the couple is blessed with the best of peace and happiness in their lives together, amen.

As I took to benefit from my short time there I found myself at the Badshahi mosque. The second largest in the country, my cousin and I arrived in time for what we thought was the start of the Friday sermon – it dragged on for two hours. Struggling to decipher the spoken Urdu as the sound echoed through a courtyard large enough to fit the Taj Mehal in neighboring India, my cousin stepped in with a translation.

In terms of structure it seemed as if there were quite a few speakers, each delivering their own message. The first actually captured my attention. He spoke with such beauty so as to encourage interaction between Muslims and non-Muslims. He encouraged engagement, dialogue, he even went so far as to say that we are one people and we must find ways to live together. The second however delivered a nearly contrasting sermon which paraphrased suggested that the world will not be safe until all of the non-Muslims are gone!

Within the space of 5 minutes we went from the type of sermon I would imagine Prophet Muhammad deliver, to the type of hate speech I would expect from any far right group anywhere in the world. If you missed the first sermon and only heard the second, how much you feel unjust! And if you were like me and you had heard both of them, how much it would look utterly confusing to you!

What exactly is the message we should have left with? Disorientated, I had lost interest in what was being said focusing my attention instead on a gathering of young men.

Their group dynamics resembled the T-birds from the movie Grease. Dressed in casual outfits of jeans and shirts, they were on a field trip from Peshawar, a city known for its much stauncher adoption of conservative dress and mannerisms.

In many respects they were a reflection of the two sermons I had just heard. Growing up in an environment which shuns the outside world, the UK, the US, Europe, yet, when speaking with them, a number of the smarter, more educated boys asked for advice on which subjects they should study enabling them to live in and travel to these very lands they are told are the root cause to all evil.

This is where I began to struggle. I doubt this was the intention of its founders, after all, the word Pakistan translates as ‘the land of the pure’, but it has certainly become the case that corruption can be found everywhere.

One day for example, I even tested the integrity of the vegetable stand owner outside my uncle’s home. After greeting my nephew in a friendly way I purchased 70 rupees worth of items. I offer him 100. He gives me back 50 and I give him 30. He looks at me, asks me to double check if it’s ok, I do, and he then pockets it. It may have been a genuine mistake but I’m convinced that he chose to keep the extra 10 rupees. Dishonesty is everywhere but I really did find it to be the icing on the corruption cake.

This general distrust, this attitude of frustration is no better seen than in mob mentality. On my last night in Lahore, my cousin and I were at a store when we saw coverage on TV of a breaking incident. Less than 500 meters away two Pakistani men tried to rob another. Turns out, that the man they attacked was actually an American ‘diplomat’. Within minutes we were back in the car trying to drive out of the area. Why? A mob had formed. As we reached a junction, men started sitting down on the ground to block the road. TV station camera vans were en route and in sight. I could see tyres being lifted to be burnt. Mob rules!

For my cousin, he wasn’t so concerned. Working for a leading international firm of accountants and auditors whose offices are in the center of the city, he narrowly avoided being injured in three separate bomb blasts. Religious extremists? Probably not. Just some poor impoverished person who is offered a few thousand dollars so his family can eat, drink, survive.

As a direct result of these instances however security across the country has been stepped up so much so that to protect children, especially girls schools - which were once viewed as easy targets - the government legislated that the walls around schools be raised then dressed with barbered wire. So when picking up my nieces one day from their school I felt as if I was outside a prison, how different the needs of the schooling system.

Back to the gathering mob, what troubled me was how quickly this turned into an anti-American rally. It is easier to blame someone else for your ills than to address your own short fallings; a classic case of transference in action.

The country is struggling. In contrast to the serene introduction with the beautiful call to prayer in Lahore, while staying in the industrial city of Gujranwala, the hours between 4 am and 7 am were nothing short of horrendous. High sounds took over the place as if they competed each others. These sounds, apparently, were the respective morning call to prayer from the numerous nearby mosques coupled with pre and post prayer speeches, songs, naats, etc.

Anything and everything that you could do to gain the affiliation of your neighbor, to show them your religious superiority, that you and your (mosque) community were somehow better, more qualified, more respectable than the one opposite the street was done. I do not for a minute imagine this being the intended outcome when Bilal called out beautifully the first invitation to prayer. Yet it has become a troubling norm. Perhaps the locals have become so accustomed to it so take no notice. For me, it sounded more like hell on earth.

So the country struggles to find its identity, and in no means can piety be matched to anything physical or visual. While etching forward in line at a toll booth on a road, a man tries to jump the entire queue, trying to force his way in front of us. My cousin driving at the time, a professor at the local university, fought back and so ensured that at the very least he didn’t get in front of us. Who was the other driver? Well he had a tasbih (rosary beads) hanging from the rear view mirror and a beard so long it could probably reach his belly button. What was the visual impression, a man of faith, the reality, something very different: just another person who 'knows' faith but doesn't 'understand' faith, in this case, simple manners!

With this in mind, I can thus understand the hesitance of the security guards at two churches in Lahore who wouldn’t let me enter. Of course I have visited churches, synagogues, mosques and temples all over the world and despite my best efforts to explain to them that my interest was in photography, they remained vigilant. Still with such tensions in the air I respect their decision even if I disagreed with it. The result sadly being that I have no visuals or insights of the Christian population of Pakistan – something that I had hoped to capture and share.

The oddest irony for me is that alongside the Badshahi mosque rests the red light district. Almost every city has one but this proximity was for me troubling. Perhaps one should find themselves in that district then head across the street for repentance?!

That day my cousin and I made our way to visit Cooco’s Den, famed for its food and stunning view of the mosque, neither of which disappointed.

Up until that time in my trip however, my jolly disposition gathered fairly negative responses from strangers. One of my nieces, now at medical school reminded me of a lesson I taught her when she was a little girl, that a smile is an act of kindness. She said, when appropriate, she would always smile at people, even if they didn’t smile back. So imagine then, the first smile I received from a stranger on this trip was from a woman sitting in the passenger seat of a car, driving alongside the wall of the mosque, emerging from the red light district.

I want to say that she too like us was just passing by but I cannot help but wonder if she was ‘employed’ locally.

All is not doom and gloom. My time with my relatives was simply superb. Perhaps I am blessed that all of them are educated, they all speak English very well, and despite the greed and selfishness evidenced throughout my journey; they like me have a good generous disposition.

And in the chaos and corruption, which runs the country, I suspect it is the goodwill and efforts of the few honest people in the country that keep it moving and give us all hope.