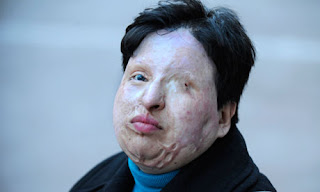 Comment: The Iranian anthorities are deluded if they think this inhumane sentence will curb attacks on women, such attacks are a result of a patriarchal and unjust society and 'an eye for an eye' will make the world blind.

In a literal application of the sharia law of an eye for an eye, Iran is ready for the first time to blind a man with acid, after he was found guilty of doing the same to a woman who refused to marry him.

Majid Movahedi, 30, is scheduled to be rendered unconscious in Tehran's judiciary hospital at noon on Saturday while Ameneh Bahrami, his victim, drops acid in both his eyes, her lawyer said.

Bahrami who had asked for an eye for an eye retribution in the court, was disfigured and blinded by Movahedi in 2004 when he threw a jar of acid in her face while she was returning home from work. "He was holding a red container in his hand. He looked into my eyes for a second and threw the contents of the red container into my face," she told the court in 2008.

According to Iranian media, Bahrami's lawyer, Ali Sarafi, has said: "A very good sentence has been given and an appropriate method has been adopted so that the convict will be blinded by few drops of acids in eyes after he is rendered unconscious."

In a highly publicised dossier in November 2008, a criminal court in Tehran ordered qisas (retribution) on Movahedi after he admitted throwing acid at Bahrami, and entitled her to blind him with acid. He was also required to pay compensation to the victim. Bahrami refused to accept the "blood money" and told the court: "Inflict the same life on him that he inflicted on me."

Iranian officials have endorsed the the sentence in the hope of halting an increase in the rate of acid attacks. But human rights activists have warned against an "inhumane" sentence.

The British Foreign Office urged Iran to halt the sentence. "The attack on Ameneh Bahrami in 2004 was a horrific crime," a spokesman said. "However, we are deeply concerned by reports that Majid Movahedi's sentence of being blinded by having acid dripped into his eyes may be carried out.

"The FCO calls on the Iranian authorities to commute this inhumane punishment to an appropriate sentence in line with Iran's international obligations and to cease the practice of corporal punishment for crimes."

Iranian media have reported that Movahedi will be blinded in both eyes but Bahrami, in an interview in 2009, said that the man would be blinded only in one eye because "each man is worth two women" under Iranian law.

"The person who did this deserves to go through the same suffering. Only this way will he understand my pain … my intention is to ask for the application of the law not just for revenge but also so that no other woman will have to go through this. It is to set an example," Bahrami was quoted by the Spanish newspaper ABC as saying.

Bahrami, who has an electronics degree and worked in a medical engineering company before the attack, moved to Spain with the help of the Iranian government where she has undergone a series of unsuccessful operations. She briefly recovered half vision in her right eye in 2007 but an infection blinded her again.

Bahrami has recently published a book in Germany, Eye for an Eye, based on her personal life and her suffering since she was blinded.

In recent months, human rights organisations have expressed alarm over the unprecedented increase of capital punishment in Iran, which last year executed more people than any other country apart from China.