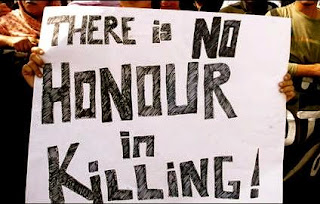 On a hot summer day in late May 1994, I drove to an eastern suburb of Jordan’s capital, Amman, to investigate the reported murder of a 16-year-old schoolgirl by her own brother.

With limited information, questions roiled my mind as I drove up the hill towards the neighbourhood. Why had this girl’s life been cut short by her brother? What had her final thoughts been?

My questions would soon be partially answered by a man who was walking through the neighbourhood when I arrived. “Yes, I know why she was killed,” he answered calmly as if talking about the weather: “She was raped by one of her brothers and another sibling murdered her to cleanse his family’s honour.”

I asked him again if what he was saying was really true.

“Yes, it is true. That is why she was killed,” the man answered me, before ushering me to the house where the murder took place.

The same “justification” was used by the girl’s uncles when I sat with them to discuss the murder. Her name was Kifaya (“enough”) they told me. “She seduced her brother to sleep with her and she had to die for that,” they said.

That sentence rang in my head throughout my career as a senior reporter at the Jordan Times and as an activist on this topic.

A few months later, I was assigned to cover court hearings on homicides in Jordan. Again, I came across dozens of stories of women who had been murdered by their male relatives for reasons related to so-called “family honour”. Some of these cases I investigated, including Kifaya’s.

To my surprise at that time, the majority of perpetrators would get away with little more than a slap on the wrist. Their sentences would range from three months to two years in prison.

But in Kifaya’s case, the court rejected the “rape excuse that was uttered by her brother and handed him a 15-year prison term for manslaughter”, as I wrote in my report for the Jordan Times. It was an unusually harsh sentence for its time.

But that sentence, like most of those relating to “honour” crimes, was later cut in half because the victim’s family dropped their legal claims against the defendant, who was, of course, also a family member. While sentencing has gradually become more severe over the years, it is still possible in Jordan for defendants to have their sentences cut in half if the victim’s family drops the charges.