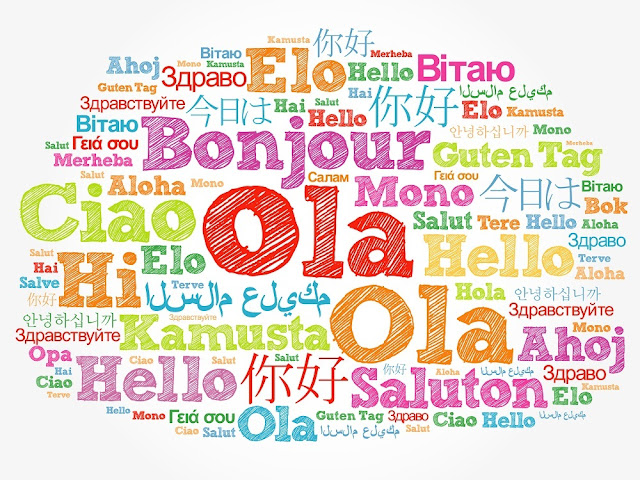 I heard a story recently of a small boy whose first language wasn't Arabic but he picked up Arabic and now insists on speaking it. He mentions that Arabic is the language of Islam while other languages are Kafir languages. This reminded me of Surah Rahman (55). A tafseer by brother Nouman Ali Khan here explains the Ayah 4 I was thinking about nicely.

To make the human capable of understanding the Qur'an, Allah gave us the ability to speak in eloquence and to understand such speech.

This shows us that Allah taught us both the Qur'an, and also all Languages.

Which shows that the honour of humans speaking -while knowing what they are saying- is an honour which belongs to Allah. So humans should be thankful to ar-Rahman (the Abundantly Merciful) because He has given us humans what no other animal has the ability to achieve [- to speak/communicate eloquently with understanding of what we are saying].

This shows that this honour of speech should be used for good and beautiful speech, and for reciting the Qur'an. Not for insults, swears and dirty language - since that is a sign of being ungrateful of Allah's favours.

Of all of the languages Allah taught; Allah honored the language in which He sent His final message; the Qur'an in Arabic speech.

إِنَّا أَنزَلْنَاهُ قُرْآنًا عَرَبِيًّا لَّعَلَّكُمْ تَعْقِلُونَ
We have surely revealed it in an Arabic Qur'an that perhaps you might understand. [surah Yusuf 12:2]

We see a Recurring Theme in these aayaat of Extreme and Magnificent Blessings of Allah;

Ayah 1: the Abundantly Merciful.
Ayah 2: the greatest manifestation of that Mercy = the Qur'an.
Ayah 3: the Greatest creation of Allah = Insaan (humankind).
Ayah 4: The Ability for us to Speak and Communicate with each other in Language.

Even Modern Philosophers are saying; the Root of all knowledge is language - that is the key. Just as Allah already told us.

All languages are taught by Allah عزّ وجلّ and we should respect them whether it is English, French, Swahili, Afrikaans, Cantonese, Mandarin, Spanish, Punjabi, Bengali, Hindi, Tamil, etc. There are no Kuffar languages.

"O mankind, indeed We have created you from male and female and made you peoples and tribes that you may know one another. Indeed, the most noble of you in the sight of Allah is the most righteous of you. Indeed, Allah is Knowing and Acquainted."

Here again, Allah عزّ وجلّ says that he not only gave us different languages but also made us different races, different tribes, etc. In the end, we are all children of Adam (peace be upon him)