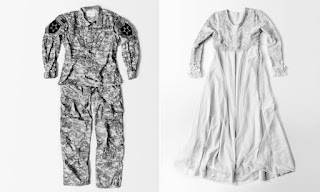 In a devastating exhibition, the Spanish artist depicts the clothes women, girls – and some men – were raped in. She talks about how her work reveals an epidemic of sexual violence – and how she copes.

What shocks me is how none of this shocks me. It is a familiar story. Weinstein’s team attempt to destroy her in court. Why didn’t she go to the police? Why did she take so long to speak out? Why didn’t she ask a co-star such as Sylvester Stallone to protect her? Yes, she was really asked this. Weinstein denies the charges. The jury started their deliberations on Tuesday.

I am taking in Sciorra’s recent testimony on the way to Paris to meet Laia Abril, a young Spanish artist with a new exhibition – A History of Misogyny, Chapter Two: On Rape. Abril uses photographs, testimonies, framed facts and quotes, archive material and various relevant objects in a way that makes her journalistic training apparent. The boundary between art and activism dissolves as Abril digests stories and then delivers them in ways “that people would be able to relate to” – even if they’d rather not go where they lead.

Given the subject matter, I expect Abril to be sombre. She is the opposite: charming and full of energy and easy to talk to, and I begin to see how so many people have trusted her with their stories and pain. The exhibition is still being installed when I arrive. Downstairs are huge black and white photographs of clothes people were raped in. Above the pictures are their testimonies.

This is not what I was expecting. I have seen shows featuring such clothing before, but there is something about how they are presented here, as objects in their own right, that dislocates you, makes you look anew. Their owners’ testimonies then provide the gut punch. Take the beautiful wedding dress from Kyrgyzstan. It was worn by Alina, who was a victim of ala kachuu, a form of bride kidnapping that is still practised in the country. She was captured and then made to marry the man who “ravished” her.

“I was a 21-year-old student in my fourth year at Arabaev University,” her testimony relates. “I wanted to be a fashion designer.” After the attack, she feared being a cause of shame: “My grandmother asked me not to disgrace the family.” So Alina put on the dress and married the man who raped her.

A photo of a US military uniform brings me up short. Meredith says being in the army means everything is “mission first”. In such a world, a woman does not want to be seen as “weak and emotional”. Meredith knew she had to downplay any injuries – and spent a year being raped by her commander, not wanting to think of it as rape, nor of herself as a victim. I walk past a nun’s habit belonging to a mother superior who abused novices, then a burqa belonging to a woman who was raped continually in a forced marriage in Afghanistan. “It was not sex,” she says, “it was marital rape.”

It took two years for Abril to develop enough trust with these women for them to send her their clothing. “It’s a collaborative process,” she says. Sometimes she talks to them through such intermediaries as psychiatrists. She does not want to subject anyone to yet more trauma.

As we chat, she tells me about the things that motivate her, in particular the infamous “wolf pack” case in her native Spain. In 2016, an 18-year-old woman was gang-raped by five men who were later tried and found guilty only on lesser charges of sexual abuse, as the prosecution could not prove they used violence. One judge said they should all have been acquitted and their only crime was the theft of the teenager’s phone. Last year, after a public outcry, the Spanish supreme court found the men guilty of rape.

In 2018, Amnesty International looked at rape legislation in 31 countries across Europe. Only eight have consent-based definitions. In the remainng 23 countries, if the offence does not include physical violence, it is not classified as rape. What Abril pushes us to confront, then, is rape as an institution, one that is both historicised and normalised. She gives the individual stories context, detailing all the methods that are deployed to blame rape on the woman, from lawyers pointing out that a victim may have been wearing a thong (one is photographed) to “the two-finger test” still used in India, Pakistan and Morocco. This procedure is to determine if a raped woman’s vagina is “habituated to intercourse”. If two fingers can be inserted, the argument goes, it indicates that the sex was consensual.

There are signs of resistance, though. Abril pays tribute to the wonderful Gulabi vigilante women of India, with their pink saris and huge sticks to beat rapists. There, encased in glass, is one of their wooden weapons. There are also projections from various revenge movies, including I Spit on Your Grave and Ms 45, about a mute woman who goes on a killing spree after she is raped twice.

A triptych of hundreds of blurred faces stops me dead. All of these men, found guilty of abuse, were priests in the Catholic church – not all of the victims in this show are female. How does Abril cope with these stories? “Don’t worry,” she says. “I have two therapists now. When I was working on abortion, for Chapter One, the issue seemed fixable by law, by decriminalisation. But this – rape – is global.” She gestures around the room at all the evidence of horrific acts. “This is an epidemic.”

It is also a war crime, something Abril is well aware of, having visited Bosnia and heard how rape was used as a weapon of war during the 1992-95 conflict. Under the title Rape Camps, she has placed the words: “Serb troops violated between 12,000 to 30,000 Bosnian women.” She also heard stories about Serbs forcing brothers to rape their sisters in front of their parents. “The International Criminal Tribunal for the former Yugoslavia,” she records, “declared that ‘systemic rape’ during wartime was a crime against humanity.”

What Abril sees – and makes us see so clearly – is the institutionalisation of rape through such things as marriage, the military and the church. I am not sure I like the phrase “rape culture” but she does. Rape is the culture, it seems. There are quotes on the wall from Donald Trump (“Grab ’em by the pussy”) and US congressman Steve King, who last year asked if there would be any population of the world left if it wasn’t for rape and incest.

All of this arouses emotion – and it’s meant to. I return to a picture I had avoided earlier. It’s a tiny dress belonging to a five-year-old who was sexually abused by a teacher at her school in Colombia. The other parents turned against the girl’s mother when she complained. Abril describes opening the parcel when it arrived. “The dress was so small,” she says. “I went into meltdown.” It was a while before she could photograph it. Yet, she says, something happens as the work goes up on the walls. All of these stories, all of this information changes her. “ I begin to feel lighter,” she says, and I can sense that.

Education is part of the answer, we agree, but the focus on individuals is not enough: rape happens because it is embedded in the culture. The #MeToo movement may have alerted us to this, but Abril’s work carries a terrifying message: that rape is normal, that it is a system, a way of controlling women across time and culture. You can look away, and I wouldn’t blame you, but Abril refuses to. “I want to understand,” she says. “I want people to understand.”

Some letters have fallen off a wall and she goes over to pick them up. I can’t help noticing that it’s almost all the letters from the word “rapist”. “Isn’t it strange that those are the letters that are falling?” says Abril. We both laugh uneasily.