'We are living by the sword': The regrets of an Israel founder's son 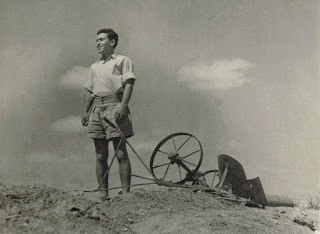 “My name is Yaakov Sharett. I am 92 years old. I happen to be my father’s son for which I am not responsible. So this is how it is.”

Yaakov chuckles and looks up from under a woolly hat towards a photograph of his father - proud in collar and tie - on his study wall in Tel Aviv. Moshe Sharett was a founding father of Israel, its first foreign minister and its second prime minister from 1954-55.

But I hadn’t come to talk about Yaakov’s father. I had come with photographs of a well which was once located in an Arab village called Abu Yahiya, situated in the Negev region in what is now southern Israel.

'I happen to be my father’s son for which I am not responsible. So this is how it is'

Researching a book, I had recently found the well and learned something of the history of Abu Yahiya village. I had heard how the Palestinians who once lived there were expelled in the war of 1948, which led to the creation of Israel.

I had also heard that Zionist frontiersmen, who set up an outpost near the village before the 1948 war, used to draw water from the Arabs’ well. Among them was a young Jewish soldier called Yaakov Sharett. So I had come to see Yaakov in the hope he might share his memories of the well, the villagers and the events of 1948.

In 1946, two years before the Arab-Israeli war, Yaakov and a group of comrades moved to the area of Abu Yahiya to help spearhead one of the Zionists most breathtaking land grabs.

As a young soldier, Sharett was appointed mukhtar – or chief - of one of 11 Jewish outposts established by stealth in the Negev. The purpose was to secure a Jewish foothold to ensure Israel could seize the strategic area when war came.

Draft partition plans had designated the Negev, where Arabs vastly outnumbered Jews, as part of an Arab state, but Jewish strategists were determined to take it as theirs.

The so-called “11 points” operation was a huge success, and during the war the Arabs were virtually all driven out, and the Negev was declared part of Israel.


For the daring frontiersmen involved, it was a badge of honour to have taken part and Yaakov Sharett seemed excited by his memories at first.

“We set off, with wire and posts and tracked through Wadi Beersheva,” he says. I flick open a laptop showing photographs of the Arab well, now an Israeli tourist spot.

“Yes,” says Yaakov, amazed. “I know it. I knew Abu Yahiya. A nice man. A tall, lean Bedouin with a sympathetic face. He sold me water. It was delicious.”

What happened to the villagers, I wonder? He pauses. “When war came, the Arabs fled - expelled. I somehow don’t remember,” he says, pausing again.

“I returned afterwards and the area was quite empty. Empty! Except,” and he peers at the photo of the well again.

“You know, this nice man was somehow still there afterwards. He asked for my help. He was in a very bad way - very sick, and barely able to walk, all alone. Everyone else was gone.”

But Yaakov offered no help. “I said nothing. I feel very bad about it. Because he was my friend,” he says.

Yaakov looks up clearly pained. “I regret it all very much. What can I say?”

And as what was to be our short interview ran on, it became clear that Yaakov Sharett regretted not only the Negev venture, but the entire Zionist project as well.

From Ukraine to Palestine
Panning out across the history, Yaakov seemed at times more like a man confessing than giving an interview.

After the 1948 war and the establishment of Israel, Yaakov studied Russian in the US and was then posted as a diplomat to the Israeli embassy in Moscow, only to be expelled from Russia accused of being a “Zionist propagandist and a CIA spy”.

On return to Israel, he worked as a journalist and on retirement devoted his later years to establishing the Moshe Sharett Heritage Society, dedicated to publishing Sharett's papers and diaries – one section in English. The Sharett diaries have been highly acclaimed, described by one critic as “among the best political diaries ever published”.

Often referring in our interview to his father’s central role in establishing Israel, Yaakov’s thoughts had evidently been brought into focus by the years he’d spent editing Moshe Sharett’s writings. Haaretz, the centre-left Israeli newspaper, commenting on the eight-volume Hebrew edition of the diaries, said it was “difficult to overstate their importance to the study of Israeli history”.

This week, publication of the abridged English edition, also translated by Yaakov – My Struggle for Peace (1953-1956) - will be celebrated at the Central Zionist Archives in Jerusalem. “It is the apex of my life’s work,” says Yaakov.

This work had also made the pain of his conclusions all the deeper as he now disavowed the validity of much of his father’s “life’s work” – and, I learn, his grandfather’s too.

His grandfather, Jacob Shertok - the original family name - was one of the first Zionists to set foot in Palestine, leaving his home in Kherson, Ukraine, in 1882 after Russian pogroms.

“He had this dream of tilling the land. The big Zionist idea was going back to the land and leaving the superficial activities of Jews who had become remote from land,” he says.

“They thought that, little by little, more Jews would immigrate until they became a majority, and could demand a state, which they then called a ‘homeland’ to avoid controversy.”

I wonder what Yaakov’s grandfather thought would happen to the Arabs, who then comprised about 97 percent of the population, with Jews around 2 to 3 percent.

“I think he thought the more Jews that came, the more they’d bring prosperity and the Arabs would be happy. They didn’t realise people don’t live only on money. We would have to be the dominant power, but the Arabs would get used to it,” he says.

Adding with a wistful smile: “Well, either they believed it or they wanted to believe it. My grandfather’s generation were dreamers. If they had been realists, they would not have come to Palestine in the first place. It was never possible for a minority to replace a majority that had lived on this land for hundreds of years. It could never work,” he says.

Four years later, Jacob wished he hadn’t come, returning to Russia, not because of Palestinian hostility - Jewish numbers were still tiny - but because he couldn’t make a living here.

Many of the very early settlers in Palestine found working on the land far harder than they had ever imagined, often returning to Russia in despair. But in 1902, after more pogroms, Jacob Sharett returned, this time with a family including Moshe, aged eight.

Palestinians were still - for the most part - welcoming to Jews as the threat of Zionism remained unclear. A member of the prosperous Husseini family, who was headed abroad, even offered Yaakov’s grandfather his house to rent in the village of Ein Siniya, now in the occupied West Bank.

For two years, grandfather Shertok lived there like an Arab grandee while his children attended a Palestinian kindergarten. “My father herded sheep, learned Arabic and generally lived like an Arab,” says Yaakov.

But the Zionist plan was to live like Jews so before long, the family had moved to the fast-growing Jewish hub of Tel Aviv and Moshe was soon honing every skill - including studying Ottoman law in Istanbul - in order to further the Zionist project.

Thanks to the 1917 Balfour Declaration, which promised a Jewish homeland in Palestine and ushered in British colonial rule, plans for a full-blown Jewish state now seemed possible, and over the next two decades, Moshe Sharett helped design it, becoming a key figure in the Jewish Agency, the state’s government-in-waiting.

Central to the project was the creation of a Jewish majority and ownership of as much of the land as possible, to which end Sharett worked closely with his ally David Ben-Gurion. Immigration rose fast, and land was bought, usually from absentee Arab landlords.

The pace of change provoked the Palestinian revolt of 1936, brutally crushed by the British. In the light of that revolt, did the future prime minister ever question whether the Jewish state could work?

“No,” says Yaakov. The leadership were “still full of justifying their ideas of Zionism. You must remember that they all thought in terms of being Jewish and how they had been subjugated by majorities in the countries in which they had lived.

“My father said this: ‘Wherever there is a minority, every member has a stick and rucksack in his cupboard'. Psychologically, he realises a bad day will come and he will have to leave. So the priority was always to create a majority and shake off the psychology of the minority for ever.

“My father and the rest still thought that most Arabs would sell their national honour for the food we would give them. It was a nice dream, but at the cost of others. And anyone who did not agree was a traitor.”