The world’s indifference to Muslim woes 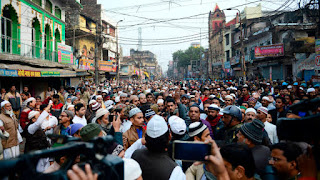 Imagine if China had incarcerated upwards of a million Christians. Or India said it would take all refugees except Christian ones. The west would be in a state of frenzy. Since both China and India’s targets are Muslim, their cause is given short shrift. Both US president Donald Trump and UK prime minister Boris Johnson claim to champion oppressed Christians. By downplaying much larger-scale violations against Muslims, they jeopardise what remains of the west’s human rights credibility. Such passivity reinforces the global shift to religious nationalism that began in the Muslim world.

The coming year will test whether these double standards are here to stay. Because Muslims are resented more than other minorities, their plight tests whether liberal democracy means what it claims to mean. There are two reasons Muslims rank lower on the global totem pole than other groups. The first is politics. Opinion polls across the west — and beyond — show Muslims as the least trusted minority. They are thought to integrate less well and be more supportive of terrorism. People believe the Muslim reproductive rate is higher than other groups. Almost a quarter of the world’s population — roughly 1.8bn people — are Muslim.

The second is how badly most of the Muslim world treats its minorities. Whether it is Coptic Christians in Egypt, Shias in Saudi Arabia, or Sunnis in Iran, Muslim-majority countries are among the worst places in which to be a minority. Do not even think of being Jewish in an Arab country. Combine these two stereotypes and you have a world that is largely callous about the fate of Muslims where they are a minority. To put it crudely, popular opinion is telling them to taste their own medicine. The fact that Muslim countries, particularly in the Arab world, have barely raised a whisper against the plight of the Uighurs in China’s Xinjiang, or protested against India’s Hindu nationalist makeover, only underlines the loneliness of Muslim minorities. Even their own look the other way.

Both Mr Trump and Mr Johnson, among other western leaders, have done a great deal to stoke such caricatures. But there is another way of looking at it. The world’s three largest countries by population — China, India and the US — are to varying degrees now hostile to Muslims. In each case, Muslims are now at the forefront of civil rights struggles. Their chances look most hopeless in China, which is closing mosques, banning Muslim garb and enforcing a switch from Uighur to Chinese. Some call this “cultural genocide”. Most exiled Uighurs will not protest by name for fear of jeopardising relatives back home. Their fate is a barometer of how far Chinese president Xi Jinping is prepared to return China to totalitarianism.

As the world’s largest democracy, India offers greater scope for Muslims to resist. But it is a losing battle. India’s prime minister Narendra Modi wants to turn the country into a Hindu nation that elevates citizens whose faith is homegrown — Hindus, Sikhs and Buddhists — as the only true Indians. Those who turn to Mecca or Rome for spiritual guidance are viewed as second class. Mr Modi did include Christians among the refugees India would accept in the recent Citizenship Amendment Act. Their exclusion would have sparked a western outcry. But he is uninterested in the fate of Myanmar’s Rohingyas, who are the world’s biggest victims of ethnic cleansing in recent years. It is worth stressing that it is Muslims who are leading the struggle to stop India’s slide into illiberal democracy.

Mr Trump is no bigger a fan of pluralism than Mr Modi — or Mr Xi for that matter. But America’s guardrails are far more robust. In Mr Trump’s first year, US courts blocked him from imposing a ban on visas from Muslim countries. He also scrapped plans to set up a database of US Muslims. But he launched his political career on the false claim that “Barack Hussein Obama” was a foreign-born Muslim. And he has reduced America’s intake of refugees to a historic low.

America no longer presents itself as a beacon. According to the Arab Barometer, there has been a rise in pro-secular sentiment — and a fall in support for Islamism — in the Muslim world over the past year. It would be a cruel irony if flickers of hope on the Arab street and beyond were to be extinguished by a world that appears to be heading in the opposite direction.