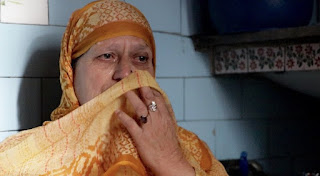 Srinagar, Indian-occupied Kashmir: Ateeqa Begum’s 22-year-old son, Faisal, is among the thousands who were arrested as part of a massive crackdown by the Indian government to prevent dissent after it revoked Article 370. Faisal was sent to a jail in the Indian state of Uttar Pradesh without even informing the family.

This is Ateeqa’s story, in her own words:
“On the afternoon of August 6th, when a complete curfew and communication blockade was in place in Kashmir, my son Faisal Aslam Mir, 22, went out to buy medicines for me. I had insisted that the situation is not good and he should not go, but he told me that he will be back in 30 minutes. That was his last time at home.
Friends informed me they saw him being arrested by police and bundled into a police jeep. I was shaken and collapsed upon hearing this.

But I somehow knew that that he has not done anything so he will be released. I went to the police station and they told me he will be released. I went to the police station for three days continuously and they assured me that he will be released.
When they shifted him from the police station to Srinagar’s Central Jail, I went to meet him there. He cried when he saw me wearing old clothes and told me, “do not be like that.” The next time I met him I wore new clothes. I was very happy to go and meet him. I also cooked his favorite mutton and onion gravy. I went very early in the morning to the Central Jail with food and his clothes.
When I was waiting for my turn with a slip in my hand I saw a woman crying and enquired about what had happened. I learned that 20 people who were lodged in the jail have been shifted to Uttar Pradesh during dawn. I collapsed outside the jail and a friend had to pick me up. I could not believe that my son was taken thousands of miles away and booked under the draconian Public Safety Act (PSA). It meant two years for him in jail.
I live alone at home now. I visit the court everyday where I have filed a petition against my son’s detention.

My son was my only support. My daughter is married and has two children. It is very difficult to fight all the battles and the worst of all is the battle against loneliness. Sometimes I lose my sanity, I go to shrines every Thursday and pray for my son’s release. That’s my only hope.
Every time I look at his photo in my kitchen I start talking to it and then I think, am I losing my mind? I know it is not only my son who is in jail, there are so many families suffering.
I am alone and it is very hard for me to manage everything. I am broken. I have cried only in these months.
This was not the first time that my son has been arrested. He was arrested before for taking active part in protests. He was booked under the PSA and tortured in jail. When he was released his health deteriorated and he suffered from psychiatric issues. Since then he had stopped taking part in protests.
He was now working as a salesman at a shop and was trying to start his own business of readymade clothes.

I would always tell him to call me several times a day as I don’t know how to operate a mobile phone. He would inform me even if he would go for a shave or haircut. I was happy that he will not be arrested again because he was not doing anything. He was not pelting stones or taking part in any demonstrations.

My son was not doing anything wrong and he was not given this chance. Isn’t this government forcing children to extremes by arresting them even when they did nothing? They did not give my son a chance to live. Isn’t it the right of our children to give them a chance to live?
They told me every day that they will release him in the evening till he was shifted to a jail in Uttar Pradesh. That is what they do to everyone. They are pushing people to the edge.
Only me and my God knows what is happening within me. I have left everything to God and pray to him only day and night.
My husband died fifteen years ago. He was a driver. He died suddenly. After my husband’s death, life has been really hard.

I forgot my husband’s tragedy now and I am only thinking about my son.
I have no purpose in life but to wait for my son’s return from jail. I will fight for him everywhere to bring him back till I am alive.”