The true story of Fatima al-Fihri, the founder of the world’s first known university 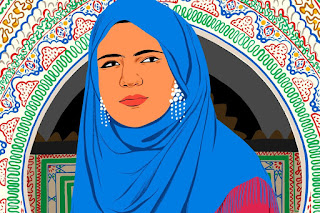 A role-model for all times <3 br="">
Fatima al-Fihri was a Muslim woman from Tunisia who founded the first known university more than 1,000 years ago: the University of al-Qarawiyyin in Fez, Morocco. Guinness World Records acknowledges it as the oldest existing and continually operating educational institution in the world.
Much of the information about al-Fihri’s early life is lost to time, but we do know that she was born into a wealthy merchant family who prized education – even for women. Fatima and her sister, Mariam, were well schooled and devoutly religious. In the early 9th century, the al-Fihri family, along with many other Arabic people, left Tunisia and emigrated to Fez – considered a bustling, cosmopolitan metropolis by the standards of the time. When her father died, Fatima inherited his fortune. The sisters then decided to invest the money in something that would benefit their local community.
In AD859, al-Fihri decided that a place of higher learning was much needed in the city and founded the al-Qarawiyyin Mosque and University, naming it after her hometown. She oversaw construction of the building – 30 metres long with a courtyard, prayer hall, library and schoolrooms.
In the beginning, the educational part of al-Qarawiyyin offered courses in religious instruction and the Qur’an, but its curriculum gradually expanded into Arabic grammar, mathematics, music, medicine and astronomy, and then began conferring degrees on its graduates. The university swiftly became a famous spiritual and educational centre, visited by scholars and intellectuals from all over the world. Al-Fihri attended lectures there until her later years.
Al-Fihri established the concept of a university as we know it today. Her idea for an educational hub that provided opportunities for advanced learning spread throughout the world in the Middle Ages, resulting in the founding of Europe’s oldest institutions in the following centuries, including the University of Bologna (founded 1088) and the University of Oxford (founded around 1096).
After al-Fihri’s death, the institution continued to be extended. The mosque became the largest in Africa, with a capacity of 22,000. Al-Qarawiyyin university is still going strong – alumni include Fatima al- Kabbaj, one of its first female students, who later became the sole female member of the Moroccan Supreme Council of Religious Knowledge.
Link
Posted by Zafar Khan at 09:00