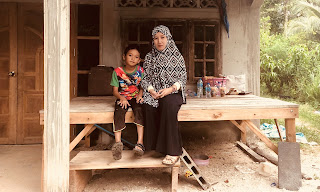 Absolutely disgraceful, we fail our own children.:(
The legal loophole has also created what Thai children’s rights activist Anchana Heemmina described as the “big business of cross-border marriage” – Malaysian men crossing into southern Thailand to easily engage in underage or polygamous marriages for which getting approval in Malaysia would be impossible or a very lengthy process.
Advertisement
Mohammad Lazim runs one such business, helping arrange cross-border marriages for Malaysian men. He works with more than 50 bridegrooms a year, mainly wanting a second or third wife – but insists never with underage brides. He says that his business is tiny compared with some.
“People come from all over Malaysia to do this,” he said. “Business is booming: instead of applying to a sharia court in Malaysia and answering all their difficult questions – a process that takes sometimes a year – the shortcut is to come to Thailand. Here there is no law.”
The practice is also particularly lucrative for imams practising on the Thai side of the Golok river, who charge four times as much to conduct a marriage for a visiting Malaysian as they do for people from their own community. In Malaysia, Che Abdul Karim would have found it difficult or impossible to obtain permission to marry Ayu; in Thailand, he simply paid the imam 4,500 baht (£105), and it was done. He has since been fined 1,800 Ringgit (£340) in a sharia court in Malaysia after pleading guilty to polygamy and conducting the marriage without the court’s permission.
Wannakanok Pohitaedaoh was forced into a violent marriage when young and now runs Luk Riang, a children’s shelter in Narathiwat. She said: “The biggest problem with child marriage in Thailand is that nobody wants to talk about it – not the Islamic Council, not the imams and not the government. It has always been swept under the rug, and that’s where they want it to stay.”
Her opposition is deeply personal. Wannakanok, now 34, was just 13 when she was forced into marriage by her parents and says the experience “haunts my soul to this day”.
“When he asked me to have sexual intercourse, I wasn’t ready for it. I didn’t even know really what that meant, so I refused, and then he raped me,” she said, sobbing at the memory. “He was very violent and every time he wanted to have intercourse, he would use violence. We were living at home, and my parents would hear me screaming.
“And it was the same for so many of my friends. Many of my friends who were 12 or 13 had been married to men who were a lot older than them, maybe in their 30s or 40s. But the girls were young like me and didn’t want sex, so violence was very common. We had no idea about sex at that age.”
Link
Posted by Zafar Khan at 09:00