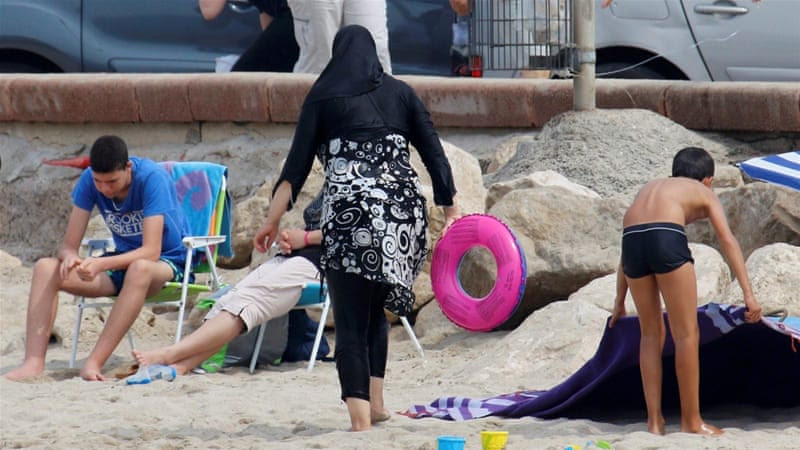 Listening to Nice's deputy mayor Rudy Salles talk about the issue on BBC radio last week - and his words echo those of other French politicians - it's hard to believe this is the case. Describing the burkini as a "provocation from Islamists", he claimed to be fighting for the freedom of women, while wanting to help people "to be integrated [into] this society".


But the problem with this approach, of forcing citizens to choose between identities - are you French or Muslim? - isn't just that it suggests an intolerance of difference, or represents a false binary.
It's that such demands carry a built-in assumption of superiority: You would only dictate such terms if you thought that the obvious, sensible preference would be for French values over a communitarian Muslim identity.

Rather than being about an equality-driven, French Republic commitment to secularism, the burkini ban seems to derive more from ideas percolated around French colonialism in North Africa - where so many of its Muslim citizens have roots.
The hijab, at that time, was derided, seen as a symbol of Islamic oppression and a part of what made North African countries so inferior.
That was the logic that underpinned and justified French colonisation of the region - but more than that: The hijab was as much a fixation then as it has become now. In Algeria, for example, the unveiling of women was a way of showing how France was liberating its female subjects from the repressive tyrannies of Islam - and so, keeping the veil on, in mirror image, in some cases became a symbol of resisting colonial rule.


This "mission civilisatrice" saw a moral duty in colonisation: A self-elevating sense of responsibility to educate and liberate populations across North Africa.
And there are unmistakable echoes of this sentiment in the words of some French politicians and feminists, who see veiled Muslim women as, by definition, oppressed and in need of saving.
It's also there in the irony of wanting these apparently "oppressed" Muslim women to be visible, to have a voice - but not actually giving the same women a voice or any agency in this debate.
Full article
Posted by Zafar Khan at 09:00