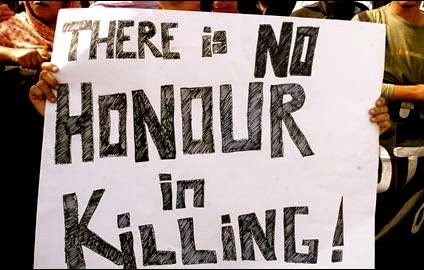 I was 17 when I first understood how little a woman's life is worth is in Pakistan. How the 'love' of a brother and a mother can lead to a woman, a girl, being hunted with brutality, killed and buried in an early grave.I met Sania (not her real name) when I was 16 and staying in my grandfather's village in Pakistan Kashmir. She had travelled to our village with her family from rural Punjab to visit some people. I remember Sania. She was 16. She was wearing a red scarf. She had beautiful almond-shaped eyes and whenever she was asked a question she would cover her mouth with the red scarf, look down and then whisper. Like most girls her age she was painfully shy.
Sania appeared curious to meet a Pakistani woman around her age from the west. Because of her shyness we communicated mostly through smiles and she spent a lot of time giggling at me.
The following year when I returned to the village and asked after everyone, I remembered Sania and asked how she was. My aunt raised her finger to her lips and told me to hush. She then pulled me inside the house and sat me down.
"She's dead. Her brother killed her. She was in the kitchen at the time. He entered the kitchen and told her that she was a shameful woman and had brought shame and disgrace on the family. He accused her of looking at a man. He then stabbed her over and over. We heard that she was stabbed at least 20 times."
Sania's brother had killed her in the family home and nobody did a thing to stop him. The police had arrested him but he was released a few days later because their mother had forgiven him. A mother had forgiven her son for killing her beautiful daughter with the almond-shaped eyes. He was free to live his life while Sania was in the ground, covered by the soil of a country that continues to betray women like her.