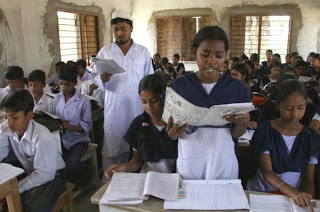 Madrassas are usually thought of as Muslim-only schools where children study only theology and end up as religious teachers or clerics.
After 9/11, many in the non-Muslim world viewed South Asia's tens of thousands of madrassas with suspicion, regarding them as a breeding ground for radical strains of Islam.
But in recent years, defying the stereotype, nearly 600 government-recognised madrassas in West Bengal have introduced a mainstream school curriculum, and non-Muslims are studying in almost all of them.
Currently, about 15 percent of the students in the state's modernised madrassas are non-Muslims, and many of them are expecting to become engineers, doctors, scientists and other professionals.

Orgram and other madrassas in the state have undergone modernisation offering courses in physics, chemistry, biology, geography, mathematics, computer science, English language and literature and other regular subjects.
Islamic studies and the Arabic language course form a small part of the curriculum.
Funded by the state, the madrassas which are located mostly in rural Bengal charge no fees, and offer free school uniforms and mid-day meals, making them especially attractive to students from poor and lower middle-class families.

Examples of Muslim students who attended the madrassas and are now successful in their careers have spurred many non-Muslim families to send their children to the madrassas, many say.
"In Hindu-dominated society until some time back, madrassas - identified as Muslims only institutions - carried a stigma. Non-Muslims and even many Muslims used to stay away from them," Dr Khandkar Fariduddin, an eye surgeon and an alumnus of a modern madrassa told Al Jazeera.
"But, now that they have known that a madrassa student can also become a doctor, engineer or other good professional, they are shedding their inhibitions and sending their children to these modern madrassas," he said.
"Now the modern madrassas are part of mainstream education infrastructure in West Bengal."