5 Ways to Stop Being Judgmental 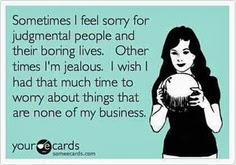 If that feeling of, “I’m better than thou,” creeps up on you while comparing yourself to someone else, consider the following:
1. Consider the saying, “Some saints have a past and many sinners have a future.”
Being a ‘saint’ isn’t guaranteed for any one person for a lifetime. But the path to God’s forgiveness is always open and especially tailored just for the one who makes a mistake and regrets it and seeks to change, even if it’s over and over and over.
2. Think about our sins and shortcomings.
Oh, wait, can’t think of any? If we can’t, we’ve been deceived by Satan and are in an even worse state than any of those whose blatant sins we perceive.
3. Remember the Prophet Muhammad ﷺ said: “No one with the slightest particle of arrogance in his heart will enter Paradise.” (Bukhari)
Sometimes the actions we see others engaged in may be sins, but may not be as serious as the problem of arrogance. In wanting others to act like they’re people of Paradise, let’s be careful not to make ourselves candidates to be barred from it. God protect us.
4. Ask ourselves: Is that person a parent?
If they are and we aren’t, they’re already light-years ahead of our game. If she’s a mom, Paradise is potentially below her feet. If they are a mom or dad, any good they taught their kid and their kid acts upon are rewards going straight back to them. How are we going to compare ourselves to that? If they are and we are, consider: what great work might their progeny do that may be because of one lesson that person taught them?
5. Remind ourselves: We have no idea what another person has gone through or where they’re really coming from.
How many people were physically beaten in order to make them pray, pressured into wearing hijab, or sexually abused by a “religious” individual? Our minute interactions with individuals are not a gateway to their backgrounds and past struggles. We don’t know the pain they’re working through. And sometimes, due to those very painful experiences, people leave the practice of Islam or leave Islam completely. But then they sometimes choose to come back. And when they do, it will take time. They have to work through their emotions, the toxic relationships which originally caused the schism they experienced with Islam and the difficulty in finding a niche in a community after leaving it for some time. And all of that is jihad. Everyday they are waging internal battles.
What they go through cannot quite be compared with the young man or woman who was raised in a supportively religious household, who was a part of a nurturing mosque community, who was put in Islamic school since kindergarten and taken to Qur’an classes everyday. A twenty-year-old hafith (one who has memorized the entire Qur’an by heart) might be impressive and may God bless them and He has raised their status in a special way. But they may not necessarily be closer to God or earning more rewards from God than the struggling servant who has dealt with incredible hardship and is struggling to come back.
So, what can we do when that ‘holier than thou’ feeling creeps in?
Think: Omar, may God be pleased with him, used to be a hostile Islamophobe who would beat his servant for her belief in God. Now, he is known to us as one of those promised Paradise by the Prophet ﷺ himself. Would he have been our role model if we knew him before Islam? Maybe not. But look who he became. You know why? Because, by God’s guidance and mercy, he had a teacher and a community who helped him reach his full potential.
That’s what we need to be for others and allow others to be for us. Be a loving mentor. Be a supportive friend. Be an encouraging counselor. Be a shoulder to cry and lean on. Your awesome love for Islam and “Muslimness” will be communicated simply through your actions of being there for others in an uplifting, genuine way. If applicable, when someone is ready, that person will ask you about Islam and seek your help in becoming the best Muslim they can be, God willing. Or perhaps they’ll be more open to listening to your sincere, gentle advice on something you’re truly concerned about because of your love for them. This perspective does not mean we do not advise others when we’re concerned for them, it simply means we do so while withholding judgment and in a methodically wise way.
Be like the Prophet ﷺ. Engulf your heart so deeply in caring for people’s happiness in both worlds that it simply does not have space for judgment or arrogance. And perhaps, because of your sincere acceptance of another, you’ll soon find that very person being a means of guidance for your own self.
Source
Posted by Zafar Khan at 12:41