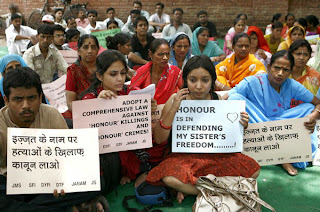 Some gruesome cases that have been reported in the media in recent times from different regions in the country include that of 23 year old Dharmender Barak and 18 year old Nidhi Barak, who paid a heavy price for defying their families and falling in love.

The couple, from a village in Rohtak district in Harayana, were tortured, mutilated and killed by the girl’s father and their relatives when they tried to run away and marry. A friend whom the couple had confided in, leaked their plans to the girl’s parents, who lured them back with assurances, only to allegedly kill them in the most cruel manner. The police is treating the ‘double murder’ as a ‘honour crime’.
In September 2013, the Haryana police arrested a police sub-inspector in connection with the killing of a 19 year old girl from Panipat. Meenakshi had eloped with her lover and the cop had tracked her down and handed her over to her family, who then allegedly murdered her.

On October 24, 2013, in another case from Haryana, a 15 year old Muslim girl from Muzzafarnagar was banished to her uncle’s house to prevent her from seeing the boy she was in love with. Her uncle allegedly murdered her and buried her in Panchkula District in Haryana.
While the cases of ‘honour killings’ continue to pile up, convictions are few and far between.