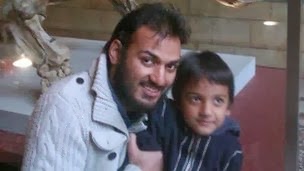 Inna Lillahi wa inna ilaihi raji'un. This is probably one of the most tragic things that I have ever had the misfortune to read. May Allah reward this brother in the hearafter for his good intentions and noble desire to help people and give his family patience to deal with such cruelty and tragic loss. Ameen.


British doctor Abbas Khan has been "in effect murdered" by the Syrian authorities just days before his expected release from jail, Foreign Office Minister Hugh Robertson said.
He said the death of the 32-year-old orthopaedic surgeon from south London was "at best extremely suspicious".
Mr Khan was arrested last year in Aleppo where he was helping civilians.
Syria's Deputy Foreign Minister Faisal Mekdad said Mr Khan committed suicide using his pyjamas to hang himself.
He said the results of an autopsy proved this, and Mr Khan's body would be released to his family so they could conduct their own inquiry.
One of Mr Khan's brothers, Shahnawaz Khan, said it was "a lie" and "pure fiction" that his brother committed suicide as he had written to his family saying he was looking forward to coming home and spending Christmas with them.