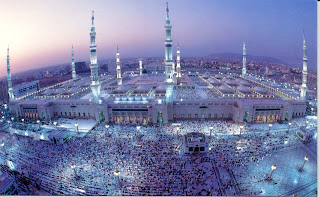 Three of the world’s oldest mosques are about to be destroyed as Saudi Arabia embarks on a multi-billion-pound expansion of Islam’s second holiest site. Work on the Masjid an-Nabawi in Medina, where the Prophet Mohamed is buried, will start once the annual Hajj pilgrimage ends next month. When complete, the development will turn the mosque into the world’s largest building, with the capacity for 1.6 million worshippers.


But concerns have been raised that the development will see key historic sites bulldozed. Anger is already growing at the kingdom’s apparent disdain for preserving the historical and archaeological heritage of the country’s holiest city, Mecca.  Most of the expansion of Masjid an-Nabawi will take place to the west of the existing mosque, which holds the tombs of Islam’s founder and two of his closest companions, Abu Bakr and Umar.
Just outside the western walls of the current compound are mosques dedicated to Abu Bakr and Umar, as well as the Masjid Ghamama, built to mark the spot where the Prophet is thought to have given his first prayers for the Eid festival. The Saudis have announced no plans to preserve or move the three mosques, which have existed since the seventh century and are covered by Ottoman-era structures, or to commission archaeological digs before they are pulled down, something that has caused considerable concern among the few academics who are willing to speak out in the deeply authoritarian kingdom.
“No one denies that Medina is in need of expansion, but it’s the way the authorities are going about it which is so worrying,” says Dr Irfan al-Alawi of the Islamic Heritage Research Foundation. “There are ways they could expand which would either avoid or preserve the ancient Islamic sites but instead they want to knock it all down.” Dr Alawi has spent much of the past 10 years trying to highlight the destruction of early Islamic sites.
With cheap air travel and booming middle classes in populous Muslim countries within the developing world, both Mecca and Medina are struggling to cope with the 12 million pilgrims who visit each year – a number expected to grow to 17 million by 2025. The Saudi monarchy views itself as the sole authority to decide what should happen to the cradle of Islam. Although it has earmarked billions for an enormous expansion of both Mecca and Medina, it also sees the holy cities as lucrative for a country almost entirely reliant on its finite oil wealth.

Heritage campaigners and many locals have looked on aghast as the historic sections of Mecca and Medina have been bulldozed to make way for gleaming shopping malls, luxury hotels and enormous skyscrapers. The Washington-based Gulf Institute estimates that 95 per cent of the 1,000-year-old buildings in the two cities have been destroyed in the past 20 years.
In Mecca, the Masjid al-Haram, the holiest site in Islam and a place where all Muslims are supposed to be equal, is now overshadowed by the Jabal Omar complex, a development of skyscraper apartments, hotels and an enormous clock tower. To build it, the Saudi authorities destroyed the Ottoman era Ajyad Fortress and the hill it stood on. Other historic sites lost include the Prophet’s birthplace – now a library – and the house of his first wife, Khadijah, which was replaced with a public toilet block.
Neither the Saudi Embassy in London nor the Ministry for Foreign Affairs responded to requests for comment when The Independent contacted them this week. But the government has previously defended its expansion plans for the two holy cities as necessary. It insists it has also built large numbers of budget hotels for poorer pilgrims, though critics point out these are routinely placed many miles away from the holy sites.
Until recently, redevelopment in Medina has pressed ahead at a slightly less frenetic pace than in Mecca, although a number of early Islamic sites have still been lost. Of the seven ancient mosques built to commemorate the Battle of the Trench – a key moment in the development of Islam – only two remain. Ten years ago, a mosque which belonged to the Prophet’s grandson was dynamited. Pictures of the demolition that were secretly taken and smuggled out of the kingdom showed the religious police celebrating as the building collapsed.
The disregard for Islam’s early history is partly explained by the regime’s adoption of Wahabism, an austere and uncompromising interpretation of Islam that is vehemently opposed to anything which might encourage Muslims towards idol worship.

In most of the Muslim world, shrines have been built. Visits to graves are also commonplace. But Wahabism views such practices with disdain. The religious police go to enormous lengths to discourage people from praying at or visiting places closely connected to the time of the Prophet while powerful clerics work behind the scenes to promote the destruction of historic sites.
Dr Alawi fears that the redevelopment of the Masjid an-Nabawi is part of a wider drive to shift focus away from the place where Mohamed is buried. The spot that marks the Prophet’s tomb is covered by a famous green dome and forms the centrepiece of the current mosque. But under the new plans, it will become the east wing of a building eight times its current size with a new pulpit. There are also plans to demolish the prayer niche at the centre of mosque. The area forms part of the Riyadh al-Jannah (Garden of Paradise), a section of the mosque that the Prophet decreed especially holy..
“Their excuse is they want to make more room and create 20 spaces in a mosque that will eventually hold 1.6 million,” says Dr Alawi. “It makes no sense. What they really want is to move the focus away from where the Prophet is buried.”

A pamphlet published in 2007 by the Ministry of Islamic Affairs – and endorsed by the Grand Mufti of Saudi Arabia, Abdulaziz al Sheikh – called for the dome to be demolished and the graves of Mohamed, Abu Bakr and Umar to be flattened. Sheikh Ibn al-Uthaymeen, one of the 20th century’s most prolific Wahabi scholars, made similar demands.
“Muslim silence over the destruction of Mecca and Medina is both disastrous and hypocritical,” says Dr Alawi. “The recent movie about the Prophet Mohamed caused worldwide protests... and yet the destruction of the Prophet’s birthplace, where he prayed and founded Islam has been allowed to continue without any criticism.”