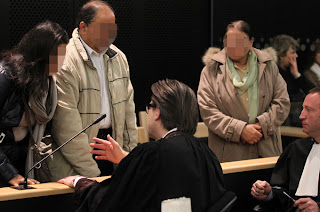 A Belgian court has sentenced four members of a Pakistani family to prison for the "honour killing" of their law student daughter and sister, Belgian media reported.

After pronouncing the family members guilty for the shooting death of Sadia Sheikh in October 2007, the jury on Monday sentenced father Tarik Mahmood Sheikh to 25 years behind bars, mother Zahida Parveen Sariya to 20 years, brother Mudusar to 15 and sister Sariya to five years.
Lawyers for the family said brother Mudusar, who confessed to pulling the trigger on the three bullets that killed his sister, was handed a lesser jail term than his parents as they were considered to have ordered the girl's death.

Prosecutors had asked for a life sentence for all three, and between 20 and 30 years behind bars for Sariya.
Sadia Sheikh, who defied the family by living with a Belgian and refusing an arranged marriage, was shot dead when aged 20 on October 22, 2007.
Mudusar admitted before the jury of five women and seven men to killing his sister while saying the rest of the family were not to blame.
Her parents and sister stood accused of aiding and abetting the killing which took place when the student visited her family in the hopes of patching up their quarrel.

Questioned during Belgium's first "honour killing" trial, Mudusar said the killing was premeditated "for a long time".
The trial also involved rights groups pleading for gender equality as part of a civil suit at the hearings.
Sadia Sheikh left the family home to study after her shopkeeper parents tried to arrange a marriage with a cousin living in Pakistan whom she had never met.

Before moving in with a Belgian man named Jean, she was helped by fellow students and teachers and also spent some time in a centre for victims of domestic violence, where she drew up a will as she felt threatened.
She had nonetheless agreed to visit the family in hopes of making peace the day she was shot.
The father, mother and sister, who also face charges of "attempting to arrange a marriage", denied involvement in the murder, saying Mudusar killed his sister in a fit of rage.
Source
Posted by Zafar Khan at 09:00