With a new imam, a new outlook 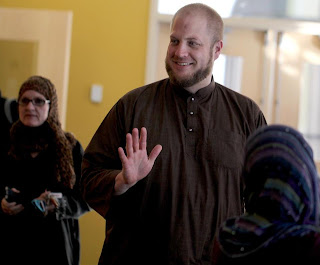 He grew up as a preacher’s grandson in Oklahoma, attending Church of Christ services twice a week, until the pull of Christianity started to weaken. His teen years were spent spinning hip-hop music as a DJ, but that world came to feel hollow.

Then he found the Koran, and William Suhaib Webb was transfixed.

Now Webb, a year shy of 40, finds himself in Roxbury as the new spiritual leader of the Islamic Society of Boston Cultural Center, the biggest mosque in New England. He started this week, and yesterday led his first jummah, the weekly congregational prayer Muslims hold on Fridays.

Webb’s unusual path to his new role is at the heart of his plan to make the mosque more inclusive, and reflects a broad desire by Islamic leaders nationally to dispel the perception of a rigid faith presided over by stern imams. That desire is evident, too, in the pop culture references Webb sprinkles into his sermons, from “Monday Night Football’’ to the Twilight vampire romance series.

“He’s ushering in a new era in the Muslim community of young imams who have knowledge of classical Islamic scholarship, but who are born in America and familiar with American life, and who are able to connect with the youth,’’ said Safaa Zarzour, secretary general of the Islamic Society of North America.

The mosque had been seeking an imam for three years. Board members were familiar with Webb - and with his life story. That narrative appealed to them.

“There’s a huge dearth of qualified imams in this country,’’ said Nancy Khalil, a board member at the Islamic Society of Boston Cultural Center. “We wanted somebody who could relate to a diverse congregation.’’

Webb, who converted to Islam at age 20, said he comes to Boston eager to introduce his big tent philosophy to an ethnically diverse community in a city with a history rich in interfaith work.

But he is also aware that he inherits a mosque with critics who accuse it of radical affiliations.

Webb himself has confronted similar criticisms, with some suggesting he is a dangerous fundamentalist who harbors discriminatory views, while others from inside his faith excoriate him for being too accepting, too liberal.

Too many mosques, Webb said - though not necessarily the one in Roxbury - scare away some Muslims because congregations seem to exclude members of certain ethnicities or are led by imams who prove overly doctrinaire.

“If we’re able to function together to some degree, then we become like a Muslim ‘Cheers,’ ’’said Webb, who is married to a Malaysian-born Muslim and has two children, ages 10 and 8. “If we can acknowledge that we have certain differences, even religiously, then we’ll be able to develop as a community.’’

Webb started questioning his Christian faith as a youngster. Despite achieving popularity as a hip-hop DJ, he felt an emptiness. But hip-hop introduced him to African-American Muslims who stirred his curiosity about Islam. He checked out a copy of the Koran from his local library and studied the faith for three years before converting.

Webb then studied under a Senegalese sheik in Oklahoma and later became imam at a local mosque there.

From 2004 to 2010, he studied at Cairo’s Sharia College of Al-Azhar University, founded in the 10th century and considered a preeminent institution of Islamic learning. He graduated with multiple certificates in Islamic sciences, qualifying him to preach and teach, and says he’s memorized the Koran in Arabic (6,236 verses).

After his time in Cairo, Webb moved to the San Francisco Bay area, where he preached at local mosques and led spiritual retreats. He also established suhaibwebb.com, a “virtual mosque’’ that showcases writings from him and about 20 Muslim scholars, who answer questions about jihad, dating, sex, music, women, and celebrating Western holidays.

The site gets more than 10,000 hits a day, with some of the most commented-on articles including “Save the Sisters,’’ “Wifehood and Motherhood are Not the Only Ways to Paradise,’’ and “Taking Off the Hijab.’’

Indeed, the role of women in Muslim communities, and how men treat women, are issues Webb grapples with frequently. He said he believes women can have active and leading roles in mosques, and said one reason he was attracted to the Roxbury mosque was because it had a woman on the board. Those views, in turn, appealed to the Roxbury mosque.

Many Muslims regard Webb’s training at Al-Azhar University as a stamp of authenticity, but Webb cautions Muslims that Islam imported from traditionally Muslim countries is not superior to the faith as it exists in the United States.

“We represent a different group of brothers and sisters now who are born in America, who went overseas to study for a number of years and realize that everything overseas isn’t necessarily right,’’ said Webb, who can seamlessly switch from English to Arabic. “I don’t have to be an Arab or a Pakistani to authenticate my Islam.’’

In 2010, Webb was part of a delegation of eight North American imams who visited the Auschwitz and Dachau concentration camps and issued a statement condemning anti-Semitism and terrorism.

“He was clear in his condemnation of anti-Semitism and evidenced considerable knowledge of the subject, and was helpful in clarifying many issues to the others on the trip,’’ Rabbi Jack Bemporad, director of the Center for Interreligious Understanding in New Jersey, said in an e-mail.

Despite his big tent philosophy, interfaith work, and preaching against radicalism, Webb has been assailed by mosque critics as a homophobic fundamentalist.

Charles Jacobs, the president of Americans for Peace and Tolerance, a Watertown-based group that has long been critical of the Roxbury mosque, accuses Webb of belonging to the hard-line Salafi sect of Islam and referring to homosexuality as an evil inclination.

“Considering Suhaib Webb’s homophobic and otherwise fundamentalist views, it would be strange to see him embraced by Boston’s progressive community,’’ Jacobs said in a statement.

Webb’s comments, posted on his website, were made in 2007 in response to an e-mailed question from a homosexual who wanted to convert to Islam. Webb acknowledged the comments, and said he regrets referring the questioner to an organization that purports to undo same-sex attraction. Webb said he believes sexual orientation is no reason to discriminate against someone’s right to worship, and that imams should offer guidance and compassion to gay congregants who seek it.

“If someone who’s a homosexual comes to the mosque, wants to pray, wants to worship, be part of the community, I have no issue with that,’’ Webb said. “Ultimately, people who have whatever inclinations in their life, no one has a right to bar them from their experience with God.’’

Webb accused his critics of belonging to an “Islamophobia industry’’ that seeks to demonize Muslims. His foes, he said, cite his old statements while ignoring more recent remarks.

“In Oklahoma, we say you can never judge a man till you walk in his moccasins. I would encourage them to come and meet me,’’ he said. Webb denied being a Salafi disciple and said he follows the Maliki Islamic school, which is followed mainly in North Africa.

Some of Webb’s biggest critics are hard-liners who accuse him of compromising Islam and misleading followers with his positions on homosexuality, gender mixing, and other issues.

In 2007, Webb left Sunnipath.com, a conservative online Islamic academy where he taught, and had a public clash with another teacher there, Sheikh Nuh Keller, also an American Muslim convert.

Online comments appended to a Los Angeles Times story about Webb earlier this year revealed the anger percolating toward him in some quarters. “This guy wants to destroy Islam from the inside, and he [wants] to turn mosques like churches where they come to eat food, and listen to music, and mingle with gays, men and women all together,’’ one commenter wrote.

“Religion is for people with issues,’’ Webb said. “Creating a comfortable space for people, and letting people know that I’m not here to indict you but invite you - that’s something that me and a few other imams in America believe is crucial to the sustainability as well as the dignity of Islam in America.’’
source
Posted by Zafar Khan at 10:00