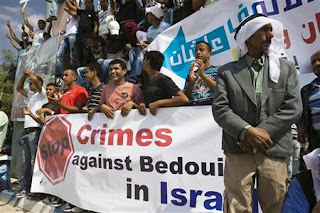 Bulldozed by Israel more than two dozen times, a village known by Bedouin Arabs as Al-Arakib is one of many ramshackle desert communities whose names have never appeared on any official map.

If Israel's Parliament adopts proposed new legislation, it never will.

The plan to demolish more Bedouin homes in the southern Negev region and move 30,000 people to government-authorized villages connected to power and water lines has been hailed by Prime Minister Benjamin Netanyahu as a "historic opportunity" to improve Bedouin lives.

But Israeli Arab leaders, who have long complained about discrimination against their community in the Jewish state, call it "ethnic cleansing," and aim to thwart the project with protests, a general strike and appeals to the United Nations to intervene.

"I will never leave here, I intend to stay until I die," said Abu-Madyam, 46, a farmer from Al-Arakib.

He and his family of nine live in a makeshift plastic-sided shack in a cemetery near the ruins of their wooden home, razed by Israeli authorities last year.

The project is the most ambitious attempt in decades by the government to resettle Negev Bedouin and free up land in the largely open spaces of southern Israel for development and construction of military bases to replace facilities in the crowded center of the country.

Some Israelis argue the Bedouin have grown too dominant in the Negev, a geographic area wedged between Hamas-ruled Gaza and the occupied West Bank where Palestinians want a state, and that they pose a possible security risk.

The area being restructured also abuts Israel's largest Negev city of Beersheba and is near several military bases.

For decades, Israeli governments have tried to attract Jewish Israelis to move to the Negev, offering mortgage and tax breaks, but the region has fewer opportunities for employment than in the heavily populated center of the country.

Only 20 percent of Israel's Jewish population lives in the Negev, which covers more than 60 percent of the nation's land area. Bedouin villages take up two percent of Negev land.

Arabs make up about 20 percent of Israel's population of seven million, 200,000 of them Bedouin citizens. Most of Israel's Bedouin, who predominate in the desert area that accounts for two-thirds of its territory, are descendants of nomadic tribes that had wandered across the Middle East from time immemorial.

Half of the Bedouin live in towns and villages recognized as formal communities by the government. Others live rough, in tents and shacks on patches of desert.