Girls will be boys in Afghanistan 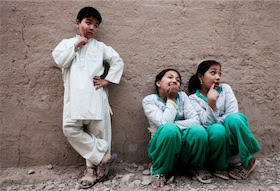 It may seem strange, if not downright unbelievable, that in a society obsessed with maintaining strict gender roles, one form of transvestism has become widespread and even acceptable. We are talking here about little girls sporting closely cropped hair, dressed in boys' clothing and carrying male names – the phenomenon known in Afghanistan as bacha posh ("dressed like a boy").

Discussing it with my Afghan friends, I discovered that many knew at least one bacha posh, if not several.

"Remember that famous theatre actress?" one friend recalled. "She lived on our street. During the Taliban rule, she dressed four of her daughters as boys."

"I knew a girl in Herat," another told me. "She used to do occasional labour work and sometimes beg on the streets."

There is also a celebrity bacha posh: Bibi Hakmina, a politician who was previously with the mujahideen. Proud of having spent all her life as a man, she never leaves home without a Kalashnikov. She never felt like a woman either, she told the BBC in a documentary film, explaining what it felt like to live one's life as a man in a society where gender roles are so strict, that being a man or a woman often feels like coming from different planets.

Bacha posh is one way of adapting to a rigid social environment where having a son is a must for any family desiring prestige and security. Families that can't produce a son sometimes resort to this deception, dressing up one of their girls as a boy and presenting her as a male offspring to society.

In this bizarre form of keeping up with the Joneses, everybody, from the bacha posh's extended family to her schoolmates and teachers, become part of the deception game. They all pretend that the girl is a boy, even after discovering the child's real gender.

The pretence stops at puberty, when the bacha posh is overnight forced to become a girl again. The world of boundless male freedoms is thus replaced with the invisible chains that mark an Afghan woman's life.

The hardest part of this sudden boy-to-girl transformation is the behavioural change it requires. Having learned to face the world with an Afghan boy's direct gaze, she is suddenly required to be coy, averting her eyes in a show of feminine modesty. On television, it's easy to spot a former bacha posh from her erect posture, her direct eye contact, and speaking up with the confidence of a man.

Women who were once bacha posh talk about the psychological impact of their imposed gender change with mixed feelings. They feel anger over lost freedoms, bitterness over never having had a carefree childhood but they also appreciate that they are possessors of a unique experience: they have seen the world through both male and female eyes.

To have known and lost freedom still remains a most bitter pill to swallow, but such is the uncompromising nature of Afghan society. There is little room for individual suffering because what matters is what people think of a family, and if a bacha posh can help her family gain respect by pretending to be a boy, then so be it.

A generous take on this would be to look at the bacha posh as gender bridge-builders with unique insight into the normally separate worlds of male and female. Some of them have gone on to shine in political careers where negotiation skills are crucial. The head of the Balkh Women's Affairs Department, Fariba Majid, the previously mentioned MP, Bibi Hakmina and Azita Rafat, one of the first female Afghan MPs, belong to this category.

But while Bibi Hakmina broke the rules by never becoming a woman again, Rafat not only returned to her original gender but also became a wife and mother to four girls. Living the life of an MP, she found herself subjected to malicious jibes for not having a son. In reaction, she then repeated her own life-story, turning one of her daughters into a bacha posh, complete with a boy's name, short hair, and looking like a perfect mini-man in a shirt and suit.

If prestige is one reason for this radical but common deception, poverty and safety also make families opt to join the bacha posh game. Many poor families without sons find themselves caught between the devil and the deep blue sea. On the one hand, allowing their girls to work as street vendors amounts to losing their moral integrity. On the other hand, the family needs money, having no choice but to let its daughters work. Unsurprisingly, the child street vendors one encounters in Afghan cities are often such girls pretending to be boys.

More recently, Afghan human and women rights groups have begun to criticise the bacha posh practice as not only a manifestation of misogyny but also a violation of the girls' rights to be themselves. But to deal with this problem is far from easy.

Like much else in Afghanistan, even though bacha posh exist in everyday reality, they do not exist officially. Ghost-like but real, the unfortunate fake boys are another symbol of a creative and resilient society that is often in denial of its own role in creating its own social ills.