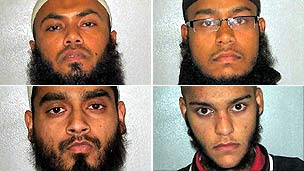 Comment: What a disgraceful, jahil bunch of inhumane violent thugs. I hope they are made very comfortable in prison. An incident like this once more shows how easily and quickly 'brothers' will turn so casually to violence, one wonders. Why is more not done in the community to declare these kinds of actions completely haram!

Four Muslim men who assaulted a religious education teacher because they did not approve of him teaching Muslim girls have been jailed.

The gang left him unconscious after attacking him with a metal rod and a brick, Snaresbrook Crown Court heard.

They pleaded guilty to GBH with intent and were ordered to serve jail sentences of four or five years.

Azad Hussain, 26, of Wapping, and Akmol Hussein, 26, of Bethnal Green, both east London, were each given indeterminate sentences and ordered to serve a minimum of five years in prison.

Judge John Hand QC said he believed the four remained a danger to the public because of their extreme religious beliefs.

Addressing the defendants one by one, he said: "Your belief is that you carried out a duty to your God and you did so with no mercy.

"If you think that people around you in society present an insult or threat to God then you will not hesitate in attacking again in the way that you have acted."

The court heard Mr Smith suffered multiple injuries, has a permanent 4.7in (12cm) long deep scar across his left cheek, and the whole of the facial part of his skull was broken.

The court heard how the men were only caught because Hussein's car was being bugged on an unrelated matter.

Hussein, who had a niece at the school, was heard to say: "He's mocking us and he's putting thoughts in people's minds.

"How can somebody take a job to teach Islam when he's not even a Muslim himself?"

Hussein was also recorded as saying he did not care if he had to go to prison over the attack as he was doing it for the sake of Allah.

Prosecutor Sarah Whitehouse said Mr Smith had been head of religious studies at the school for eight years and was "by all accounts an able, enthusiastic and popular teacher".

The court heard he cannot remember the attack and has problems with his memory and sufferers from depression and anxiety - all of which now affect his ability to teach.

A fifth defendant, Badruzzuha Uddin, 24, of Shadwell, east London was jailed for two years after admitting a charge of assisting an offender after he hid the men's bloodstained clothes.