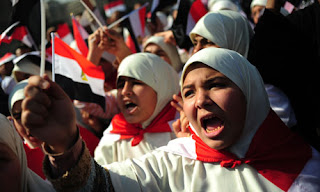 Comment: Words cannot express how disgusted and outraged I am about this...and the general's comments they reflect how so many men think, if the women are not your own family (those under yout control) they are fair game to be humiliated and assaulted...disgusting!

Egyptian activists will hold an online protest on Wednesday to press the military leadership to investigate soldiers who abused pro-democracy demonstrators, including women who were detained and forced to take "virginity tests".

The interim authority, formed after Hosni Mubarak was ousted in February, has come in for increasing criticism from the youth movement for the slow pace of its reforms, and intolerance of dissent.

The abuse of the women, which was confirmed by a senior army official, has caused particular anger, and prompted a storm of protest on the internet.

The Supreme Council of the Armed Forces had previously denied claims by Amnesty International that 18 women detained in March were subjected to virginity checks and threatened with prostitution charges.

But an Egyptian general told an American television network on Monday that tests were in fact conducted, and defended the practice.

"The girls who were detained were not like your daughter or mine," the general, who requested anonymity, told CNN. "These were girls who had camped out in tents with male protesters in Tahrir Square, and we found … molotov cocktails and [drugs]."

He said the tests were conducted so that the women would not be able to claim that they had been sexually abused while in custody.

"We didn't want them to say we had sexually assaulted or raped them, so we wanted to prove that they weren't virgins in the first place," the general said. "None of them were [virgins]."

Amnesty condemned the general's comments and called for a full investigation.

"This general's implication that only virgins can be victims of rape is a long-discredited sexist attitude and legal absurdity," a statement said. "When determining a case of rape, it is irrelevant whether or not the victim is a virgin. The army must immediately instruct security forces and soldiers that such 'tests' are banned."

The women were detained on 9 March, nearly a month after the revolution that forced Mubarak from power, when soldiers cleared Tahrir Square after men in civilian clothes attacked protesters.

One of the female victims, Salwa Hosseini, 20, told Amnesty that she and the other women were forced to remove their clothes before being strip-searched by a female guard. Male soldiers looked into the room, and took pictures, she said.

The women were also beaten and given electric shocks, Amnesty reported.

The growing dissatisfaction with the interim government is increasingly clear. While the military council has pledged to organise elections this year and hand over to a civilian government, tens of thousands of people appeared in Tahrir Square last week to demand faster reforms.

Youth activists have said that additional, online protests are necessary because Egypt's mainstream media treads too softly around the military, a taboo carried over from Mubarak's reign.

The new rulers have shown themselves to be thin-skinned, with a military prosecutor summoning a prominent blogger and a television journalist after they criticised the army during a talkshow. Three other journalists were also called in for questioning on Tuesday. They were all released without charge.

In a statement, the Arabic Network for Human Rights Information condemned the military council for "dispersing fear" among the media and the judiciary. The group said that three judges were also under investigation for appearing on talkshows where they criticised the use of military courts for civilian cases and called for judicial reform.