God says women drivers are evil and deserve to die. 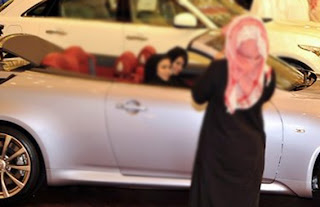 Follwing is excerpt from article you can read here: Once more I am shocked at disgraceful words of yet another woman-hating, sex-obsessed extremist patriarchal 'scholar' seriously these men must have issues with their mothers!

God says women drivers are evil and deserve to die.

And then there's this. The Saudi-owned Elaph.com website reports on the meditations of Saudi cleric Shaykh Abd-al-Rahman al-Barrak against women who wish to drive cars. "What they are intending to do is forbidden and they thus become the keys to evil in this country," he writes, calling them "westernized women seeking to westernize this country." Name-calling aside, al-Barrack is drawing on an extremist Wahhabi interpretation of Islam, according to which God forbids any mixed-gender mingling outside the family. Giving women the freedom to move around on their own would be to tempt God's wrath.

In fact, al-Barrak predicts the activists will be struck dead: "They will die, God willing, and will not enjoy this." The reporter for Elaph.com, with an impressive degree of restraint, refers to this as "biting criticism." (Al-Barrack seems to enjoy something of a contrarian reputation among the Wahhabi chattering classes: Earlier this year, he endorsed a fatwa that calls for the demolishment and subsequent redesigning of Mecca's Kaaba -- Islam's holiest site -- so as to avoid gender mixing. Biting!)

At least no one offered up the old saw that women aren't any good at driving. Probably because on that score Saudi women are painfully aware that their male counterparts aren't in any position to judge.