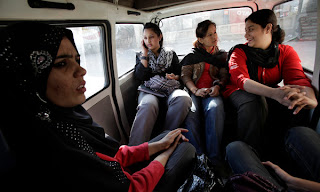 Karachi, Pakistan — Dinner at Rabia Sultana’s house is now served over a cold silence. Her family has not spoken to her since May, when Ms. Sultana, 21, swapped her home life for a cashier’s job at McDonald’s.

Her conservative brother berated Ms. Sultana for damaging the family’s honor by taking a job in which she interacts with men — and especially one that requires her to shed her burqa in favor of a short-sleeved McDonald’s uniform.

Then he confiscated her uniform, slapped her across the face and threatened to break her legs if he saw her outside the home.

Her family may be outraged, but they are also in need. Ms. Sultana donates her $100 monthly salary to supplement the household budget for expenses that the men in her family can no longer pay for, including school fees for her younger sisters.

Ms. Sultana is part of a small but growing generation of lower-class young women here who are entering service-sector jobs to support their families, and by extension, pitting their religious and cultural traditions against economic desperation.

The women are pressed into the work force not by nascent feminism but by inflation, which has spiked to 12.7 percent from 1.4 percent in the past seven years. As a result, one salary — the man’s salary — can no longer feed a family.

“It’s not just the economic need, but need of the nation,” said Rafiq Rangoonwala, the chief executive officer of KFC Pakistan, who has challenged his managers to double the number of women in his work force by next year. “Otherwise, Pakistan will never progress. We’ll always remain a third-world country because 15 percent of the people cannot feed 85 percent of the population.”

Female employment at KFC in Pakistan has risen 125 percent in the past five years.

Several chains like McDonald’s and the supermarket behemoth Makro, where the number of women has quadrupled since 2006, have introduced free transit services for female employees to protect them from harassment and to help persuade them take jobs where they may face hostility. “We’re a society in transition,” said Zeenat Hisam, a senior researcher at the Pakistan Institute of Labor Education and Research. “Men in Pakistan haven’t changed, and they’re not changing as fast as our women. Men want to keep their power in their hand.

“The majority of the people here believe in the traditional interpretation of Islam, and they get very upset because religious leaders tell them it’s not proper for women to go out and to work and to serve strange men.”

At work, some women spend more time deflecting abuse from customers than serving them. On the way home, they are heckled in buses and condemned by neighbors. It is so common for brothers to confiscate their uniforms that McDonald’s provides women with three sets.

“If I leave this job, everything would be O.K. at home,” Ms. Sultana said. “But then there’d be a huge impact on our house. I want to make something of myself, and for my sisters, who are at home and don’t know anything about the outside world.”

So far, the movement of women into the service sector has been largely limited to Karachi. Elsewhere across Pakistan, women are still mostly relegated to their homes, or they take jobs in traditional labor settings like women-only stitching factories or girls’ schools, where salaries can be half of those in the service industry. Even the most trailblazing of companies, like KFC, still employ 90 percent men.

Pakistan ranked 133rd out of the 134 countries on the 2010 Global Gender Gap Report’s list of women’s economic participation.

While there is no reliable data on the number of women who specifically enter the service sector, Pakistan’s female work force hovers around 20 percent, among the lowest of any Muslim country.

Some women, like Saima, 22, are forced to lead secret lives to earn $175 a month. Her father’s shopkeeper’s salary does not cover the family’s expenses. Without a university degree, the only job Saima could find was at a call center of a major restaurant’s delivery department. But she impressed the manger so much that he offered her a higher-paying waitress job at a branch near her home.

She reluctantly agreed, but pleaded to be sent to a restaurant two hours away so she would not be spotted by family members and neighbors.

After three years, her family still thinks she works in the basement of a call center. On several occasions, she served old friends who did not recognize her without a head scarf. Her confidence has soared, but she is overwhelmed with guilt.

“I’ve completely changed myself here,” she said in the corner booth of her restaurant before her co-workers arrived. “But honestly, I’m not happy with what I’m doing.”

The women interviewed said they had to battle stereotypes that suggested that women who work were sexually promiscuous. Sometimes men misinterpret simple acts of customer service, like a smile. Fauzia, who works as a cashier at KFC, said that last year a customer was so taken with her smile that he followed her out the door and tried to force her into his car before she escaped.

Sunila Yusuf, a saleswoman who wears pink traditional clothes at home but skintight jeans at the trendy clothing boutique in the Park Towers shopping mall, said her fiancé had offered to pay her a $100 monthly wage if she would stay at home.

“He knows that Pakistani men don’t respect women,” she said.

Hina, who works the counter at KFC, said her brothers, who also work fast-food jobs, worried that she had become “too sharp and too exposed.”

“They can look at other people’s girls,” Hina said with a grimace. “But they want their own girls hidden.”

Mr. Rangoonwala, the KFC Pakistan executive, said: “Unfortunately, our society is a hypocritical society. We have two sets of rules, one for males and one for females.”

For Fauzia, the hardest part of the day is the 15-minute walk through the narrow alleys to reach her home. She wears a burqa to conceal her uniform, but word of mouth about her job has spread. Neighbors shout, “What kind of job is this?” as she briskly walks by with her head down.

As a solution, some companies spend up to $8,000 a month to transport their female workers in minivans.

A federal law, citing safety concerns, prohibits women from working after 10 p.m. It was extended from a 7 p.m. deadline last year.

Most companies, however, are unwilling to absorb the extra cost of employing women. Even most stores that sell purses, dresses, perfumes and jewelry do not employ women.

Kamil Aziz, who owns Espresso, the city’s most popular coffee chain, said he made it a point not to hire “the other gender” because women could not work the late shift and the turnover rate among women was higher. He said he also did not want to invest in separate changing rooms.

Nearly all of the 100 women interviewed said marriage would end to their careers. But many of them saw benefits along with the hazards.

Most women said that they had never left the house before taking a job. Many spent the first five months missing buses and getting lost. When they first arrived at work, they stuttered nervously in the presence of men.

“I’ve learned never to take what husbands say at face value,” said Sana Raja Haroon, a saleswoman at Labels, a clothing boutique where men sometimes slide her their business card.

But the employed women are also approached by admiring young women who want to follow their lead.

“Girls envy us,” said Bushra, a KFC worker. “We are considered the men of the house, and that feels good.”