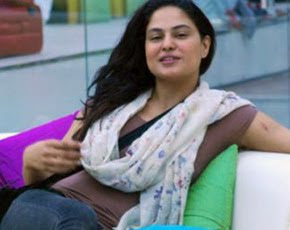 Last night, I happened to watch the most brilliant (and at the same time, disgusting) TV show on a local Urdu news channel. Brilliant, because in an hour it summarised everything that is wrong with this country and our mindset. The show featured our entertainment industry’s starlet Veena Malik and, Mufti Abdul Qawi.

Not that I was expecting anything but vitriol on the show, but even then I was shocked. From the way Veena Malik was introduced to the closing statement of the show, every single minute was filled with chauvinistic and downright derogatory remarks.

The programme started with clips from the Indian reality show (Bigg Boss) that Veena was a part of, a show that has stirred quite a controversy. The subject of controversy being that apparently, Veena did not correctly represent Pakistan or Islam on the Indian TV show.

Throughout the hour-long programme, the host kept attacking Veena by using words such as “oryan,” “fahash” and kept insisting that Veena had brought shame to Islam, Pakistan and our culture. The Mufti on the show was asked to judge Veena’s presence on Bigg Boss in the light of Islam. Here, I must also add that the host tried his best to emphasise that the Mufti had the right to impose a fatwa on Veena for her actions.

I must commend Veena for standing her ground with such grace. Despite the kind of language and slander that was being hurled her way, she braved a response and a commendable one too: “From my wardrobe to everything else, nothing on that show was in anyway different than what we see our actresses doing or wearing in our films. I was representing the entertainment industry of the country. One click on the internet can justify it all.”

Her response to the Mufti and the host, brought to the forefront the harassment women have to face that has conveniently been camouflaged as ‘honour and dignity’. But what really pushed me to write this blog was a question Veena asked Mufti Abdul Qawi: “Why am I being treated this way? Why am I being questioned? What is my fault, Mufti sahab? Because I am a woman? A soft target?”

It is true, no one would have dared to speak in such a way to a man, call him names or even questioned his character or his activities on national television. Not that they should, but has anyone ever questioned Atif Aslam, Ali Zafar, Rahat Fateh Ali Khan or the numerous others who have worked in Indian films, produced music and music videos in India? Has anyone ever scrutinised their actions? We have never discussed if any of their videos merit Islam or our culture. Yet, we consider it our right to slander a woman and make her look like the sole custodian of the country’s ‘honour’.

Those who believe such vehement reactions are justified need to rethink their definition of ‘honour and dignity’. Honour that gets disrupted because of a woman’s appearance on a reality show but remains unscathed when over a 1,000 infants – most of them girls – are killed or abandoned to die. This is nothing short of hypocrisy.

In a country, struggling with insurgencies, poverty, inflation, and failure of governance, what Veena Malik did or said on a reality show should be the least of our concerns. But it seems as though moral policing has become our favourite past time. To be more precise, such slurs are actually called ‘slut-shaming.’ What this means is that when a woman acts in a way that is not considered acceptable in the society she lives in, she is verbally attacked and slandered in order to rule out her credibility; in order to divert focus from the main issue.

Veena Malik is just one example how certain factions of our media have resorted to moral policing and even advocating fatwas on anyone and everyone. Never mind that we have never pushed for fatwas against suicide bombings, honour killings and many other heinous acts justified in the name of Islam.

I recall thinking at one point during the show, how Veena Malik did not represent me and that we should stop making this about the ‘country’s image’. But after watching her response to the slurs being hurled her way, I take it back. Veena Malik represents me and many, many women in this country who have been subjected to moral policing. In a country where rape is justified, murderers glorified and women threatened by fatwas, Veena speaks for me and many others.

At the end of the programme, a teary-eyed Veena questioned the absence of outrage from her fellow countrymen, when she was being abused, bullied and subjected to hate for being a Pakistani on the same show. In those last minutes, she struck at the very heart of hypocrisy that is rampant in this country.

The Moral Police or the Ghairat Brigade conveniently turns a blind eye to horrific incidents like when infants get raped, but creates uproar if a woman dares to make choices for herself. It is my request to my readers and everyone who indulges in such behaviour to please stop; stop this madness, the moral policing and the fatwa factory before it devours us all.

Sana Saleem is a Features Editor at BEE magazine and blogs at Global Voices, Asian Correspondent, The Guardian and her personal blog Mystified Justice. She was awarded the Best Activist Blogger Award by CIO & Google at the Pakistan Blogger Awards. She can be found on Facebook and Twitter.
Posted by Zafar Khan at 09:40