Grooming and our ignoble tradition of racialising crime 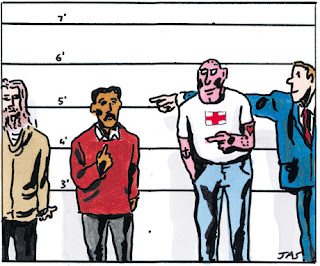 The British National party's website, its logo still sporting a seasonal sprig of holly, is understandably triumphalist as it proclaims that the "controlled media" has admitted this week that "Nick Griffin has been right all along about Muslim paedophile gangs".

The particular branch of the controlled media the BNP refers to is the Times, which has been running the results of a lengthy investigation into the sexual exploitation and internal trafficking of girls in the north of England. Specifically, the Times has marshalled evidence suggesting that these organised crimes are carried out almost exclusively by gangs of Pakistani Muslim origin who target white youngsters; and it quotes both police and agency sources who refer to a "conspiracy of silence" around the open investigation of such cases, amid fears of being branded racist or inflaming ethnic tensions in already precarious local environments.

This is not the first time that anxieties about the ethnic dimension of child sexual exploitation have been aired by the media. In 2004 the Channel 4 documentary Edge of the City, which explored claims that Asian men in Bradford were grooming white girls as young as 11, sexually abusing them and passing them on to their friends, was initially withdrawn from the schedules after the BNP described it as "a party political broadcast", and the chief constable of West Yorkshire police warned that it could spark disorder.

Anecdotally, as far back as the mid-90s, local agencies have been aware of the participation of ethnic minority men in some cases of serial abuse. But what has not emerged is any consistent evidence to suggest that Pakistani Muslim men are uniquely and disproportionately involved in these crimes, nor that they are preying on white girls because they believe them to be legitimate sexual quarry, as is now being suggested.

The Times investigation is based around 56 men convicted in the Midlands and north of England since 1997, 50 from Muslim backgrounds. Granted, such prosecutions are notoriously difficult to sustain, but, nonetheless, this is a small sample used to evidence the "tidal wave" of offending referred to by unnamed police sources. Martin Narey, the chief executive of Barnardo's, which has run projects in the areas concerned for many years, tells me that, while he is pleased to see open discussion of child sexual exploitation, he worries that "decent Pakistani men will now be looked at as potential child abusers". He insists: "This is not just about Pakistani men, and not just about Asian men. And it is happening all over the country."

While Narey acknowledges that "in the Midlands and north of England there does seem to be an over-representation of minority ethnic men in [offending] groups", he argues strongly that no useful conclusions can be drawn until the government undertakes a serious piece of research into what is a nationwide problem. (Keith Vaz, who chairs the Commons home affairs select committee called for such an inquiry today.) Narey also refutes the allegation that Muslim men are grooming white girls because of cultural assumptions about their sexual availability, as girls from minority backgrounds have been similarly abused.

Thus no official data exists on the ethnic or religious background of perpetrators of this form of child abuse, and local charities have stated publicly that they do not consider it a race issue. But it is worth noting that, when asked by the Times to collate its recent work according to ethnicity, Engage – based in Blackburn and one of the largest multi-agency organisations working on this issue – found that in the past year that 80% of offenders were white.

There is an ignoble tradition of racialising criminality in this country, in particular sexual offences, from the moral panic about West Indian pimps in the 1960s to the statistically dubious coverage of African-Caribbean gang rape in the 90s. But even those who do want further investigation into the apparent preponderance of Asian perpetrators tell me that this is not about cultural expectations regarding the sexual susceptibility of white females but rather about opportunity and vulnerability, especially of young people within the care system. It is certainly admissible to query just how beholden to "the tyranny of custom", as Wednesday's Times leader put it, are these twentysomething males who drive flash cars and ply their victims with alcohol.

Nevertheless, Muslim voices are now being lined up to attest that serial child molestation is not actually sanctioned by the Qur'an. By building an apparent consensus of voices "bravely" speaking out in the face of accusations of racism, it becomes that much harder for a figure from within the Muslim community to offer a more nuanced perspective or indeed state that these allegations are simply not true. The inevitable and distorting consequence of framing the debate around a "conspiracy of silence" is that it effectively shuts down or taints as mealy-mouthed any criticism.

The efforts of the Times to stand up this investigation are certainly considerable: selectively quoting or misquoting some groups, and inventing a category of "on-street grooming" that does not exist in law and was not recognised by any of the agencies I spoke to. It is also worth asking how responsible it is to provide ammunition to the violent racist extremists already active in these areas on such flawed evidence.

Meanwhile, the sunlight of investigative inquiry has yet to shine on our legal system which, all agencies agree, fails to cater to the needs of children who – groomed into acquiescence by practised abusers of all creeds and colours – don't present as the perfect victims our limited version of justice demands.