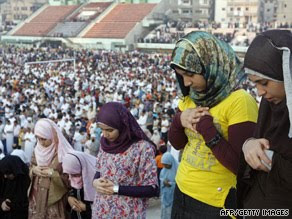 ‘Ata (radiallahu ‘anhu) said, “Jabir bin ‘Abdullah said, ‘The Prophet went out on the Day of Eid-ul-Fitr and offered the prayer before delivering the khutba. ‘Ata told me that during the early days of Ibn Az-Zubair, Ibn Abbas had sent a message to him telling him that the Adhan for the ‘Id Prayer was never pronounced (in the life time of Allah’s Messenger) and the khutbah used to be delivered after the prayer. ‘Ata told me that Ibn Abbas and Jabir bin ‘Abdullah had said there was no Adhan for the prayer of Eid-ul-Fitr and Eid-ul-Aqha.’ ‘Ata said, “I heard Jabir bin ‘Abdullah saying, ‘The Prophet stood up and started with the prayer, and after it he delivered the khutbah. When the Prophet of Allah (sallallahu ‘alaihi wa sallam) finished (the khutbah), he went to the women and preached to them, while he was leaning on Bilal’s hand. Bilal was spreading his garment and the ladies were putting alms in it.’” I said to Ata, “Do you think it incumbent upon an Imam to go to the women and preach to them after finishing the prayer and Khutba?” ‘Ata’ said, “No doubt it is incumbent on Imams to do so, and why should they not do so?”