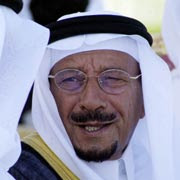 Saleh al-Sayeri, a 64-year-old shepherd-turned-businessman, says his marital adventures have cost him more than $1.6 million in wedding expenses and settlements for divorced wives. But the man who remembers being forced into his first marriage at age 14 says he'd do it a million times over.

"Marriage doesn't bore me," he said, relaxing on cushions at a carpeted, open-air reception area in his 22-horse stable in Usfan, in the desert 500 miles west of Riyadh. "I'm the happiest man in the world."

Al-Sayeri's story might seem a bizarre curiosity, but it touches a nerve in Saudi Arabia, the status of whose women is a matter of international controversy.

When it surfaced in Saudi media in March, some readers reacted angrily.

A woman who identified herself as Maryam, a convert to Islam, wrote to the Arab News, an English-language daily, that al-Sayeri's story "really sent me over the edge."

"What kind of a family structure is this? What is divorce doing to the psychologies of the ex-wives and children? How can this man devote any quality time to his children — teaching them about Islam and being a constant role model?" She wrote.

Sayyidaty magazine, which interviewed al-Sayeri, also spoke to psychiatrist Mona al-Sawwaf who said al-Sayeri does not treat a wife as a human being "but as a piece of clothing he can change whenever he pleases or an object."

"The biggest blame lies with the parents" who let their daughters enter such marriages, she said.

Al-Sayeri dismisses such critics as "crazy," insisting he is not breaching Islamic laws, which permit a man to have four wives at a time.

"I have a clear conscience," he said.

None of Al-Sayeri's ex-wives could be reached. He said many have remarried, but to reveal their identity would be a gross violation of Saudi custom. One of his sons said his mother has remarried, but refused to give details.

Divorce has become quite common in the kingdom, with press reports saying half of all marriages break up. But the fate of a divorced woman depends on her parents' frame of mind. If they oppose the divorce, they likely will confine her to the house and monitor her movements. She will be barred from dating or working without family permission.

The notion of a single career woman barely exists here. Women cannot even drive. They cannot get an education, travel or check into a hotel without a male guardian's permission.

Some parents, on the other hand, are modern-minded enough to let their daughters finish their schooling or go out to work. And although Islamic laws permit a man to have four wives at a time, most Muslim men today take one wife, because it has become the cultural norm and polygamy is costly.

Money is not an issue for al-Sayeri, who says he has made a fortune trading in cars and property. He is a dark, medium-built man with black mustache and goatee who heads the Sayer, a southern Bedouin tribe. He also raises camels and horses.

He has had 10 sons, one of whom died. Two sons who were at the stable while their father was being interviewed rolled their eyes whenever the subject of marriages came up. They said they had come to accept that their dad is "mizwaj," a man who likes to marry often.

Fahd al-Sayeri, who inherited his father's passion for horses, recalled a desert hunting trip some 15 years ago in the remote Empty Quarter. He and his friends had gone in search of gasoline when they heard celebratory gunshots coming from a tent. They had come across a wedding.

"Out of politeness, we asked who's wedding it was," Fahd said.

"The guests responded with my father's name. I was shocked," he added.

It's not that the elder al-Sayeri hides his marriages. He just doesn't always bother to spread the word. He said two of his daughters learned they were sisters and two sons they were brothers at school.

Some wives even attend his weddings and bring the bride gifts. But he said he keeps each wife in a separate villa and sometimes even in a different town to keep the peace, and assures each that she's his favorite.

Al-Sayeri said he has married first cousins and women from about 30 tribes all over the kingdom. "As a leader of a tribe, I can't marry just anybody," he said.

He said three of his four current wives have been with him 18 to 40 years. The fourth seems to be the one who usually gets replaced.

"It's the one for renewal," said al-Sayeri, sipping cardamom-flavored coffee after a dinner of spicy lamb and rice. "I like to change my fourth wife every year."

His latest marriage — and at 10,000 guests his most sumptuous — was to a 14-year-old girl nine months ago. She was the perfect age, he said.

When he heard about her, he sent his niece to check her out. She came back with a favorable report.

Then he visited her family. When the girl came into the living room to offer him refreshments — an excuse for him to see her face — he asked her if she would marry him.

"She was shy at first and didn't answer but then she said yes," al-Sayeri recalled. "Now, we're such good friends it feels we've known each other 40 years."

A Saudi woman will usually marry whomever her family chooses, and marriage is considered acceptable from the onset of puberty.

Al-Sayeri claims he has never forced a woman to marry him, and has never been turned down. His ex-wives get a divorce settlement set out in a prenuptial agreement and he supports the children, he said. He said all his divorces are documented with court-issued papers that usually follow this declaration to his wife: "You are divorced."

He said today's women are "more pleasant to have around."

"They take better care of themselves, use makeup and do not run away every time I want to touch them," he said.