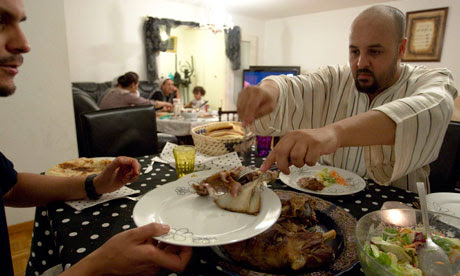 The Qu'ran reminds us animals and birds are 'communities like you'. So why do so many Muslims break their fast with meat?

For most of the billion-plus Muslims who sit down each evening to break their Ramadan fast, meat will be on the menu. Lots of it. But how Islamic is eating meat?

Not very, according to Sheikh Hamza Yusuf, who argues that historically Muslims ate so little meat they were almost vegetarian. "Meat is not a necessity in sharia, and in the old days most Muslims used to eat meat – if they were wealthy, like middle class – once a week on Friday. If they were poor – on the Eids."

In today's world, meat-eating has taken on a new fervour, with many Muslims demanding animal flesh as part of their daily diet. Just the other day, an Egyptian journalist was relating to me how he attended a dinner at a local organisation here in Cairo. When people arrived, questions began to fly across the hall: "Where is the meat? We aren't going to have enough for everyone."

According to a recent study by the Egyptian cabinet's Information and Decision Support Centre, 89% of Egyptians eat more than 2kg of meat monthly. This figure rises along with social class. The study revealed that wealthy Egyptians often consume more than 8kg of meat each month.

The prophet Muhammad was not an advocate of daily meat-eating. Instead, the Islamic Concern website says, he warned his followers against constant meat consumption as it could become "addictive". It seems that 1,500 years later his concerns are not being heeded.

Early Islamic leaders and scholars repeatedly emphasised that animals were to be cherished and treated in a humane manner, but many Muslims nowadays view animals as the dominion of people. A sheikh at the Egyptian ministry of religious endowments told me: "Animals are slaves for human purposes. They were put here for us to eat, so talk of vegetarianism is un-Islamic."

This statement by the ministry official goes against everything the prophet stood for, in the opinion of Gamal al-Banna, a prominent Islamic scholar who has come under attack in recent years for his "liberal" stance. Al-Banna told me that being a vegetarian and Muslim does not break any tradition and is in no way un-Islamic.

"When someone becomes vegetarian they do so for a number of reasons: compassion, environment and health reasons," he began. "As a Muslim, I believe that the prophet would want the followers to be healthy, compassionate and not destroy our environment. If someone believes not eating meat is that way, it is not like they are going to go to hell for it. It may be the right thing to do."

Al-Banna continued, when I asked him about the Eid al-Adha sacrifice (which many argue is obligatory), that any Muslim who believes in being vegetarian does not have to slaughter a sheep. "In today's modern world, ideas and religion change and Islam is no different. We must not remain rigid in our understanding of faith to mean the blind acceptance of anything, killing living beings included. There is no obligation to kill."

Others disagree, arguing that meat-eating is part of the Islamic tradition and, thus, vegetarianism is a foreign notion for the Middle East. Muslims who eat meat at every iftar (fast-breaking evening meal) this month undoubtedly believe they are doing the right thing. On the other hand, the idea that animals are merely slaves to humans is not only abhorrent to animal-rights advocates, but seems to be at odds with the prophet's teaching.

Some would argue that the prayer said before halal slaughtering is part of Islam's humanity when animals are killed for food. This may have been true historically, but in today's "halal" slaughterhouses, a pre-recorded prayer often blares nonstop as the animals are lined up and killed. That is a cop-out from what Islam teaches about "humane" slaughter.

Ultimately, the argument is simple. The Qur'an reveals that all living animals are sentient beings, just as human beings are.

"There is not an animal on earth, nor a bird that flies on its wings – but they are communities like you." (Qur'an, 6:38)