Ramadan is not an excuse for gluttony 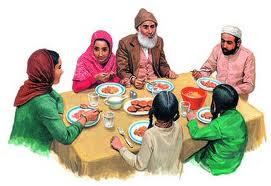 An estimated 1.6 billion Muslims around the world are marking the start of one of the most important months in the religious calendar, Ramadan. We believe that it was during Ramadan that the Qur'an was revealed to the prophet Muhammad. So, for the next 30 days Muslims will abstain from water and food from sunrise to sunset. The sound of rumbling tummies will echo from Milton Keynes to Mecca.

Fasting is a humbling but rewarding experience. It's also exhausting and testing, a necessary reminder of the struggle that the majority of the world's population face every day to find food and water to nourish themselves and their families.

As I write this it's nearly 4am. I've prayed and finished eating suhoor, which is the Arabic word for the meal that Muslims eat early in the morning before beginning their day of fasting. This morning my husband and I munched on hummus with warm pitta bread, yoghurt and a handful of blueberries, and drank tea and water. Our cats seem to have got into the spirit of Ramadan. One of them ta

pped me on the leg as I made my blurry-eyed way to the kitchen to tell me she wanted an early breakfast too.

As we sat down to suhoor we were reminded that in much of the Muslim world people would be starting the fast with much less than us, including the almost 14 million people whose lives have been devastated by the floods in Pakistan. It's a sobering thought.

In stark contrast, there are some parts of the Muslim world where Ramadan has become an excuse to gorge on lavish, artery-choking foods and party like its 1431 (which it is, according to the Islamic lunar calendar).

Around the Arabian Gulf, hotels are decked out to look like halal hip-hop videos, with more bling than you could shake an abaya at. The filthy rich hire out hotels and garden tents to throw gluttonous parties after sunset as Indonesian and Filipino maids sit in the corner bouncing their employees' babies on their laps.

When I worked for a well-known Arab news network in the Gulf, staff were treated to the most spectacular iftar (the evening meal that breaks the daily fast during the month of Ramadan). Forget about the standard British egg-and-cress or mayonnaise-drenched prawn triangle sarnies with a sprinkling of kettle crisps provided for awaydays and meetings. These gut-busting affairs resembled wedding banquets, with five different starters, main courses and at least three desserts. The whole experience left me feeling spiritually starved and unclean.

On one occasion, while working a night shift, I stumbled across a waitress emptying trays of iftar food into a black bin liner. I asked her what she was doing. She said it was leftover food and she had been instructed to throw it out. In that moment, all the excitement and joy that I had felt in my heart for Ramadan that year drained away. I encountered the same thing when I spent Ramadan in Mecca two years ago. At suhoor time guests in the hotel would carry mountains of lasagne and fried foods to shovel down their throats before making their way to pray at Islam's holiest site.

My brother has just called to tell me that my six-year-old niece Iman – her name means faith – woke her parents up excitedly at 2.30am to tell mum and dad it was time for suhoor. She joined them for a yoghurt in solidarity and then skipped off to bed. That kind of beauty and simplicity is what Ramadan is really about – getting back to basics.