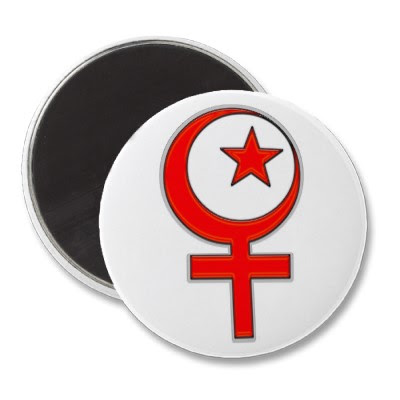 A lot of people need to calm down about this subject. Whether it’s among non-Muslims, Muslims, or fascist Islamophobes in Europe and North America, there seems to be a growing obsession with Muslim women and the way they dress.

A few weeks ago, I attended an event as part of “Islamic Awareness Week” hosted by a local university where a panel of three Muslim women shared their personal experiences and views on Islam and modesty. Two of the women wore hijaab (headscarf) and one didn’t, which apparently, I’m sorry to say, seemed enough to draw controversy.

In the Q&A discussion, a young Muslim man said something that made me take pause and then realize how utterly offensive and repulsive his comment was. He argued that the Qur’an is “not spiritual,” but rather “practical,” especially in regards to hijaab because, according to him, “the hijaab is supposed to cover a woman’s neck and I admit, when I see a woman’s neck, I get attracted.” I smiled and looked at one of the panelists, a friend of mine, who also smiled at the absurdity of his comment. I followed up by tossing the panel a question that was set up for my friend to spike the young man’s comment: “I am sick and tired of men telling Muslim women how to dress,” she said boldly. She included both the Muslim men who impose hijaab/niqaab/burqa on Muslim women and the Islamophobes who are hell-bent on banning these styles of dress.

I am familiar with the young man’s views on hijaab and modesty. I used to say similar things myself. I would see Muslim women wearing tight shirts, jeans, and no hijaab, and I would judge them in my thoughts: “Look at how she’s dressed and she calls herself ‘Muslim’?” Then I would gripe to my Muslim friends, both female and male, about how “westernized” Muslim women are becoming. I remember coming across Muslim women wearing hijaab and tight jeans and thinking how hypocritical she must be. And the reason why my Muslim friends and I were so upset about this was because such manner of dress drew lustful and sexual gazes from men. In other words, I believed that, for the most part, Muslim women were responsible for the “uncontrollable” sexual urges of men.

It was always a Muslim woman’s fault. If some ignorant non-Muslim playfully tugged her hijaab in the computer lab, it was her fault because she gave him the liberty to be that free with her. If a man was checking her out, it was her fault because she didn’t choose to wear a long shirt. Unfortunately, I find this sexist mentality to be very prevalent in Sunni orthodoxies, especially among Muslim men. The disturbing thing, in my opinion, is how I thought that everything I believed about Muslim women, how they should dress, and how they should behave was not sexist, but actually liberating because it taught Muslim women how to be “real,” “respectable” women.

Over the years, I learned that it wasn’t about liberating women. It was about controlling them and molding them the way *I* wanted them to be. The way a lot Muslim *men* want them to be: obedient, passive, soft-spoken, sensitive, reserved, etc. In my mind, it was improper and sacrilegious for Muslim women to even flirt with a man, to even make a mentioning of sex, to even have male friends. Why? Because with this sexist, over-controlling, and uber-conservative mindset, it is always about sex.

Why can’t Muslim women be friends with men? Because there is a chance of sex. Why can’t Muslim women laugh or smile at a man? Because one of them might be thinking about sex. Why can’t Muslim women and Muslim men shake hands? Because they might get so turned on that they’ll rip each other’s clothes off and start having sex. Oh my God, if I hear a woman give the azaan (call to prayer), I’ll start thinking about sex because a woman’s voice is attractive and alluring. Oh no, we can’t take the partition out of the Mosques, the women and men won’t be able to keep their hands off each other. As if there’s a high risk of a giant orgy or something. That sounds practical.

And it’s not that sex is a bad thing — it’s not — but when it’s used in this hyper-sexual context to control the way women think, behave, and dress, it becomes something very dirty. Extremely dirty (see the paragraph above). Over time, this made me very uncomfortable because on one hand, Muslims would stress so much on “modesty” and not seeing each other as sex objects, but ironically, that is exactly what we were doing: sexually objectifying each other. The young Muslim man at the event who said he gets attracted by a woman’s neck is talking about her as a sex object, as if her body is so tempting that he cannot resist it, hence she must cover up. It also made me wonder if he had any idea how disgusting and sexual his comment was, considering that the majority of women (Muslim and non-Muslim) in the room had their necks visible? What is he saying, that he is thinking about each and every one of them sexually? And that if his mind is flooded with sexual thoughts, it is their fault?

This needs to stop. Muslim men need to stop examining Muslim women like lab specimens and instead, turn inward and look at themselves. It’s like blaming a rape victim and saying “she was just asking for it” because of the way she was dressed. Too often, I’ve heard Muslim men tell me, “Oh brother, look at the way Muslim women dress these days. They have no dignity, they don’t care about the Sunnah or Islam.” Too often, I’ve heard Muslim men point out a Muslim woman and say, “Look at how she’s wearing tight jeans” or a “t-shirt” or “not even wearing hijaab.”

My response is: So? Let them dress however they want. Look at you, I say sometimes to certain Muslim men, you’re wearing a muscle shirt, you don’t think you’re showing off your skin or that women can’t get attracted? How can you look into a person’s soul and judge them based on what they are wearing? The Qur’an talks so much about humility, yet so many of us are quick to make judgments about a person’s faith, as if we have some authority to do so. I have known Muslim women who don’t wear hijaab and are more religious/spiritual than I am. I have known Muslim women who wear hijaab, but hardly know anything about the Prophet’s life (peace be upon him). This doesn’t mean one is better than the other. The way a Muslim woman dresses should not be seen as reflective of her faith.

As a Muslim man, I tend to stay away from this topic of how Muslim women dress only because I see so many other Muslim men arrogantly giving lectures, writing books, and dictating in Mosques about how Muslim women *should* dress. Where are the lectures, books, and sermons that tell men to keep themselves in check? Why is there this sexist double-standard and attitude that Muslim women cannot be attracted to Muslim men either? Where are the imams and religious leaders who say, “If you’re getting turned on by a woman’s neck, that is your problem because *you* are seeing her as a sex object?” The truth is that Muslim men can have sexual thoughts about Muslim women regardless if they’re wearing hijaab or not, and anyone who says otherwise is lying. If a man feels distracted by sexual thoughts, it is not because of the way Muslim women are dressed, it is because his mind has wandered off in that direction. He should not blame a Muslim woman for his issues, he should turn inward and deal with it himself.

There is nothing wrong with desire and attraction. We are naturally attracted to each other as human beings. It is the way God made us and Islam does not teach celibacy, but rather to fulfill our desires in responsible ways. I am not saying we should see each other as sex objects, I am saying we should be honest with ourselves and acknowledge that yes, you may see someone in the Mosque or at an MSA event that you are attracted to, but that doesn’t mean your thoughts are “evil” and “impure.” How can we talk so much about marriage in Muslim communities without also talking about attraction, physical and non-physical? There is such a thing as Love and marriage where people find their partners beautiful and attractive, and don’t view/treat one another as sex objects.

We need to stop obsessing over the way Muslim women dress because it continues to lead to many problems that exists in our communities today: awkward and often hypersexualized gender interactions/relations, stigmatization of non-hijaab Muslim women, sexism and misogyny, and even problems in relationships/marriage, among many other things. If we really care about God’s Love and Compassion, then why make others in our community — people we are supposed to consider our spiritual sisters and brothers — feel like “bad” or “deviant” Muslims just because they don’t dress the way *we* want them to?

Why not express our compassion by accepting each other for who they are, treat everyone equally and refrain from making judgments? Isn’t that what humility is about?