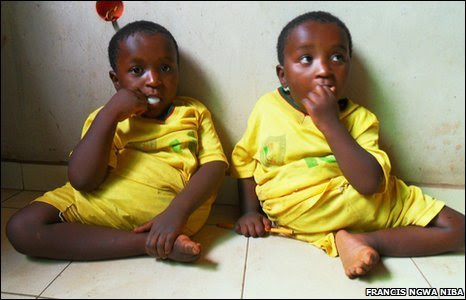 Cameroonian conjoined twins Pheinbom and Shevoboh were seen as a bad omen when born, but their successful separation by Saudi surgeons has changed their lives - and the faith of some in their village.

They were joined at the chest, abdomen and pelvis when born and some of the delivery nurses in Babanki Tungo, a village in north-west Cameroon, were so shocked by the "strange birth" that they ran out of the small clinic.

The basic medical services in Babanki Tungo were ill-equipped to care for the girls and, following an internet appeal, the Saudi king agreed to pay for them to be flown to Saudi Arabia for surgery in 2007.

The 16-hour operation succeeded in separating the twins and now they each have their own stomach.

However, nearly three years on from the surgery, serious physical challenges remain.

After the separation, the girls were left with one leg each, and they are now waiting to return to Saudi Arabia to be fitted with artificial limbs and begin the arduous task of learning how to walk.

At the moment, they can only crawl. Even so, the twins are playful, talkative and mischievous - typical four-year-old girls, in fact.

But when they were born, they were anything but typical.

Some people in Babanki Tungo - a farming village known for producing many of Cameroon's vegetables - thought they were "satanic gifts" sent to punish their father, who already had 13 other children by two different wives.

Others believed that Pheinbom and Shevoboh were sent to punish the whole village, after a traditional leader in the region was burnt alive by his angry subjects.

"It was very difficult when the babies were still joined together," the girls' mother Emerencia Nyumale remembers.

"People used to see me carrying them and run away and I felt so guilty and alone," she says.

"Thank God all that has ended now since their separation."

The girls' story has had another importance consequence for the people of Babanki Tungo.

The Saudi government is funding an Islamic centre in the village consisting of a mosque, nursery, primary school and health centre.

This has led some village elders to predict that the largely Christian Babanki Tungo will be slowly Islamised.

The twins' parents have taken the lead.

As a mark of appreciation to their daughters' Saudi benefactors, they have converted to Islam.

Kum Edwin, a teacher at the school, has also converted.

"Before the school was opened, I was unemployed, had many girlfriends and drank a lot," says Mr Edwin, who has changed his name to "Abdallah Wagf".

"When I heard an Islamic school will be opened here, I did a three-month Islamic studies [course]… I no longer drink a lot and I am now searching for a wife because having lots of girlfriends is not good."

Many people in Babanki Tungo now see the birth of Pheinbom and Shevoboh as a blessing rather than a curse.

The sight of the twins crawling around the village no longer attracts mistrustful looks, as once it did.

"I always tell every parent to be patient because God always tempts people by showing them bad things which are good things in the future," muses the girls' father.

Indeed, the twins have seen a remarkable change in their fortunes.

From outcasts at birth, they now have their own, separate lives and have played an important part in changing the lives of the people around them.

After all that, learning to walk may prove to be easy.