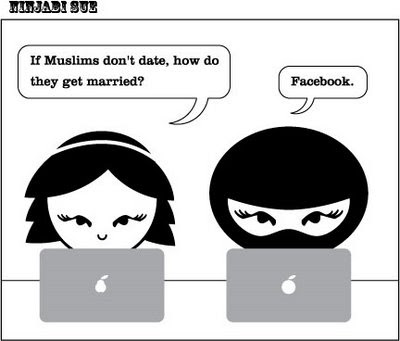 A provocative title, though I doubt the discussion will be quite as titillating. Before getting into a debate over the title, I’d like to establish some context. Marriage is important in Islam, for men and women. Love and respect are too. To even contemplate loving and respecting someone enough to marry them, one has to meet and speak with the person sufficiently in open, non-judgmental, supportive and protected settings that promote honest and relevant dialogue. That is the premise for ‘dating while Muslim’.

Even before that, men and women both make significant contributions to communities and to families. Islam recognizes that, and encourages respect between men and women. Courtship and marriage come later, but first Muslim men and women need to be able to interact effectively and respectfully with one another.

A Case for Dating

Dating as we know it in broader American society is a taboo with most Muslims. This is understandable because although Islam is not a prudish religion, it is very particular about behaviors within marriage and outside of marriage. Within marriage, the relationship between man and woman is very intimate and one of protection. Outside of marriage, men and women cannot be intimate. They each need to protect themselves. Thus, the free mixing of men and women in unchaperoned settings is not encouraged because of what it may lead to, namely ‘zina’ or fornication.

However, let’s take a step back and ask ourselves, really, what is dating? Dating in essence encompasses the communications and interactions between a man and a woman that are based on mutual interest and could potentially lead to marriage. In a Muslim American setting, these interactions can be controlled and adapted to be ‘halal’, relevant, thoughtful and transparent.

Let’s be honest, as a community we may not talk about dating among Muslims, but ignoring it doesn’t mean it doesn’t exist does it? Wouldn’t it be better to acknowledge its existence, and establish that there’s nothing wrong with it within certain established parameters?

From the perspective of Muslim singles today, really, what option do we have? In our parents and grandparents generations and historically, marriages were arranged. Families were very critical to the decision-making process and the decisions were often strategic, matrimonial alliances. That is not the case anymore.

Now, we are on our own. Family and friends may suggest individuals, or we may put ourselves out into the matrimonial circuit (sites, events, ‘rishta’ aunties or matchmakers), but once the introductions are made, it’s just us.

When meeting Muslims within the community, we are meeting people who are grappling with the same issues of identity, insecurity, judgment/criticism and social pressure that we are. The result of this is that when it comes to potential affairs of the heart, Muslim men are increasingly passive (or passive aggressive) and Muslim women are increasingly aggressive. Without forums for broader discussion and guidance (‘khutbas’ or sermons, dialogues, discussions, roundtables on Islam, marriage, gender relations, sexual relations, etc), this divide will only grow. We need to normalize basic gender relations between Muslim men and women through consistent efforts by the community in order to get Muslim men and women to the table for relevant and meaningful interaction and dialogue.

Additionally, the suggestion has been made that single Muslim women should start looking outside the community (after all that’s what Muslim men do right?). Conceptually, I agree with my friend who says that it’s a form of ‘dawah’ (educating non-Muslims). She mentioned to me that in her very conservative community there is a position that women should be allowed and encouraged to marry non-Muslims who take the ‘shahada’ (the proclamation of faith in Islam) because Islam has the capacity to evolve in one’s heart over time. If communities are in fact encouraging this, how does a woman meet and get to know those men except through some form of dating?

Being on our own, Muslim singles (particularly women) need the support and the protection of the community, whether we are meeting fellow Muslims or non-Muslims from outside the community. Establishing an acceptable framework for Muslim dating that is open and supported by the community might help to enforce a level of accountability, a system of checks and balances, that is not robust at this time.

Why is this important? Let me illustrate. I had an online suitor once, a single Muslim man in another city via a matrimonial website. Initially, he seemed intelligent, interesting and personable. We spoke on the phone once or twice a week for several weeks. As we spoke more, I started noticing evasiveness about basic personal facts. I began to get the distinct feeling that he was not only hiding information, but that he was lying and misrepresenting himself. Additionally, he was trying to manipulate my thinking by consistently quoting particular sections of a certain ‘hadith’ (oral traditions of the Prophet Mohammed PBUH). I wanted to give him the benefit of the doubt, but was becoming increasingly uncomfortable. I finally took a friend who was acquainted with this person into my confidence and asked him for his advice. As soon as he figured out who it was, he said three words, ‘Zeba stay away’.

This feeling of being alone and unprotected in these situations is magnified (at least for me) on non-Muslim matrimonial websites and when meeting non-Muslims because they may come from a different moral framework and there are few if any ways to place them (among Muslims I can find a brother, sister or friend that I know). Our families help as much as they can, but the broad based support and protection of the community would be invaluable.

By not considering a progressive position on issues like dating we, as a community, are not only encouraging covert behavior and a lack of accountability, we are also not supporting or protecting our vulnerable populations.

One of the reasons Muslim singles are facing challenges today in gender based relations is because of the no-talk rule between Muslim girls and boys at Sunday School and through college in the MSA. When many of us were growing up we were told in no uncertain terms that we could not/should not talk to Muslims of the opposite gender.

As a result, Muslim men and women often don’t know how to speak with each other and when they do that little nagging voice is saying, ‘’tauba’(repent)! you are not allowed to talk to Muslim boys/girls’. Once the voice is quieted we realize that we are still about 15 in this arena, and very self-conscious and uncomfortable interacting with each other, particularly in community settings. We don’t know what to expect of each other, and cannot always speak openly with each other.

Another illustration, I once met another suitor for dinner in Chicago. We had spoken and emailed for a month or two. I was visiting and so we met for dinner. After dinner we were walking in downtown Chicago, and suddenly, he disappeared. Or, actually, he ducked. After about a minute or so he reappeared telling me that he saw his cousin driving down the street and didn’t want the cousin to see him with me. Honestly, even 15 is pushing it, I mean how juvenile is that?

The heart of the issue is Muslim men and women need to be able to talk to each other with respect, but without self-consciousness, fear of judgment, anxiety, or the feeling that they are doing something wrong. We need to be strong fellow Muslims to one another and this emotional underdevelopment is crippling. Being able to relax and take mixed-gender situations in our stride is vital if we want to raise the level of discourse and the ability to speak and interact with each other in meaningful ways.

So, I’ll say it again, ‘dating while Muslim’ anyone?