The curious case of ‘1,000 conversions’: Who is Umar Gautam? 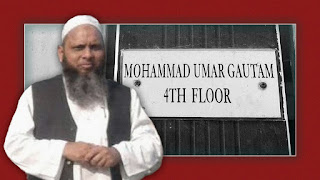 For about a week now, TV news channels have run primetime shows on the Uttar Pradesh police busting an alleged “conversion racket” in Delhi. The tentacles of this network are spread across India, we are told. Angry anchors also tell us the racket was being funded by Pakistan’s spy agency ISI.

The police have arrested four people for running the alleged “racket”. While the mainstream media claims that over 1,000 people have fallen victim to it, so far no more than two families have alleged forceful conversion of their sons, both students of a school for the deaf in Noida.

So, what’s the “conversion racket” all about? Who are the people arrested for allegedly running it? What are they accused of exactly? Is there any truth behind the narratives playing out on TV screens?

Newslaundry went on the ground to find out.

On the fourth floor of a building in Delhi’s Batla House, a nameplate identifies the occupant, “Mohd Umar Gautam, Chairman, IDC.”

Umar is the leader of the “conversion racket”, according to the UP police’s Anti Terrorist Squad which arrested him on June 20 along with Mufti Kazi Jahangir Kasmi, an employee of the IDC, or Islamic Da’wah Centre.

A woman answered the doorbell. “We don’t want to talk to the media,” she said. “You are not showing the truth.”

She was Umar’s wife Razia, 51. It took some persuasion for her to agree to tell the family’s side of the story.

Razia has been married to Umar for over 30 years. They both originally come from Rajput families in Fatehpur district, UP.

“My husband was a disciple of Lord Hanuman and would visit the temple every Tuesday and Saturday,” Razia recalled, narrating the story of the couple’s conversion from Hinduism to Islam in the 1980s. “We were so religious that people would often call me Poojita, meaning one who worships. As is the custom for Hindu families in Uttar Pradesh, we would also go for ‘Maghi Snan’. Our marriage was arranged when we were still in our teens.”

Maghni Snan is an annual 30-day ritual that involves devotees taking a dip in the Ganga river.

The year was 1984. Umar was Shyam Pratap Singh Gautam and studying for a BSc at the Govind Ballabh Pant University, now in Uttarakhand. One of his rommmates at the university was a Muslim named Nasir Khan. “Nasir would take my husband on his cycle to the temple every week,” Razia said. “One day, Shyam asked him why he accompanied him to the temple so diligently. ‘To please my God,’ Nasir replied. ‘My religion teaches me to take care of those in my haqooq’. It was this incident that changed the course of Shyam’s life.”

By “those in my haqooq”, Nasir meant the people in his social circle whom his religion enjoined he had obligations towards.

Shyam spent a month reading the Bible, Gita and Quran, and then converted to Islam. He took a new name, Mohd Umar Gautam. His conversion wasn’t out of the ordinary. Several villages in and around Fatehpur have seen Rajputs converting to Islam.

Sometime in the 90s, Umar and Razia moved to Delhi. For over a decade, between 1995 and 2007, Umar was employed at Ajmal & Sons, a company owned by perfume baron and All India United Democratic Front leader Badruddin Ajmal with its head office in Assam’s Hojai. According to Razia, her husband oversaw schools run by Ajmal & Sons.

“My husband is a reputed man and a respected scholar. Because of this incident my entire family has been disturbed,” Razia said, wiping away tears with her headscarf. “You can ask around if we have converted anybody by force. There is our househelp from Nepal, check with him if we have ever tried to influence him to change his religion.”

Umar and Razia have two sons and a daughter. The older son is an engineer at an IT firm and the younger is preparing for MBA. Their daughter, Fatima, is an assistant professor at a deemed university in Delhi. She told Newslaundry that her father was cooperating with the investigation when he was arrested. “I remember him leaving that day. We thought since everything was transparent on our end, it should be fine. Else we would have informed a lawyer and local leaders,” she said, breaking down.

Fatima said they have records of all conversions which IDC helped formalise. “We can produce video clips of reverted Muslims who embraced Islam on their own,” she maintained, adding that her family were planning to launch an online campaign to garner support for Umar.

At this point, a couple of Umar’s neighbours joined the conversation. Anjum, a resident of Kanpur, said she had contacted Umar about a decade ago when she wanted to convert to Islam from Sikhism. “My husband is Muslim and I wanted to formalise the relationship legally,” she added. “I came from a Sikh family. We believed in the ideals of Brahmakumaris.”

The other neighbour, an elderly woman who lives on the floor below, said, “Food and religion can’t be forced down anyone’s throat.”

She claimed that a few days ago a TV channel’s staff came to her house asking what kind of a person Umar was. “They never aired it because I said nice things about him,” she added.

Razia passed her mobile to me, playing a video from a YouTube channel called Millat Times. It was an interview with Sujit Shukla, a doctor in Bengaluru. In the interview, posted two days after Umar’s arrest, Shukla said he had heard about Umar on a train journey years ago and contacted him when he wanted to convert to Islam in 2004. “Everything is documented and filed,” Shukla said when asked about the conversion process. Did he benefit materially from his conversion? Shukla laughed and said, “Well it’s a loss making venture financially since all family ties are cut soon after conversion.”

The case was filed on June 4 against Mohd Ramzan alias Vipul Vijayvargiya and his brother-in-law Mohd Kashif who had tried going into Ghaziabad’s Dasna temple by hiding their identities, Kumar alleged, with the aim of assassinating its priest.

The priest, Yati Narsighanand Saraswati, is a Hindutva extremist who routinely spews venom against Muslims and their faith. In April, speaking at Press Club of India, he hurled insults at Islam and Prophet Muhammed, leading to the Delhi police filing an FIR against him. The previous month, his followers had brutally assaulted a Muslim boy for entering the temple premises to drink water. Afterwards, the temple put up a poster barring Muslims from going in.

The investigation into Ramzan and Kashif, Kumar claimed, led the ATS to Umar who they allegedly found was involved in the “forced conversion” of about 1,000 Hindus.

Razia disputed these allegations. Ramzan and Kashif had gone to the Dasna temple to debate the priest after he insulted their religion and prophet. Umar knew Ramzan, a resident of Nagpur who converted to Islam after marrying a Muslim woman named Ayesha.

Shahabuddin has been living in the locality for seven years and knows Umar. He said “people would go to him only to legalise conversion”.

“It is all political,” another resident, who has lived in the colony for decades, added with a wry smile, referring to Umar’s arrest.

At Umar’s home, Razia also lashed out at the incumbent political dispensation. “So many people have died of Covid, so many have lost jobs, yet the focus of the government is conversion,” she said, suggesting the case may be a ploy to distract from “real issues”.

The doorbell rang. A few Delhi police personnel cops had arrived for identity verification. Umar’s wife and daughter panicked. Frantic calls were made to local legislator Amanatullah Khan. The women are ushered into another room as Gautam’s son answered the police’s questions at the door. The family was getting used to the new normal.