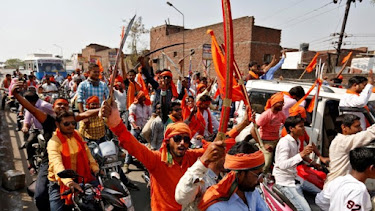 “Hum unka murder bhi na karen “Can’t we even murder them (Muslims)?” These were the words of Suraj Pal Amu, president of an Indian far-right outfit Karni Sena, while addressing an audience of 50,000 at a Mahapanchayat (great council) in the north-Indian state of Haryana on May 30. The council was held in support of the accused arrested for lynching a Muslim man in Mewat, Haryana.

On May 16, a 25-year-old Muslim youth Asif Khan from Mewat’s Khalilpur Kheda village was lynched allegedly by a mob. Asif was returning home after buying medicines.

When the police arrested the accused in the ‘lynching case’, people from a certain section of the Hindu society opposed their arrest. This is not the first time when some sections of the Hindu majority community in India supported people accused of committing crimes against Muslims, India’s largest religious minority.

This incident, and similar incidents like this, illustrate that India is following the path of Nazi Germany where the majority of Germans were radicalized to the extent that they blindly supported the holocaust against the Jews. In Nazi Germany, Jews were dehumanized by Hitler’s propaganda machinery. They were called ‘cockroaches.’ Using such kind of genocidal terminology is the first step towards genocide. Holocaust didn’t start with gas chambers, it started with hate speeches.

When a section of the society is dehumanized, the other groups of the society become apathetic towards them. The perfect example of this was how German society supported Nazis and their actions, which killed millions of Jews.

I can see the same pattern being replicated in India. Muslims in India are being dehumanized and the majority of Hindu society has become mute spectators. The right-wing Hindu politicians and a large section of Indian Media continuously target Muslims. This leads to the dehumanizing of Muslims in the social sphere and they are, in turn, treated as the second class citizens of India.

The pattern of this dehumanization can be seen in various ways.

Since ultra-Hindu nationalist Narendra Modi came to power in 2014, several Muslims were lynched by Hindu extremist mobs in different incidents across the country. Following these incidents of violence against the Muslims, those Hindu extremists who were involved in these heinous crimes received support from certain section of the majority community, and in turn, exposing the deep-seated bigotry of the majority society.

Just a week after Modi took oath as Prime Minister of India in 2014, a Muslim techie named Mohsin Shaikh was lynched in Pune, Maharashtra by members of a far-right Hindu outfit called Hindu Rashtra Sena. The accused Dhananjay Desai was released on bail and received a heroic welcome from his supporters.

In 2017, a Muslim daily wage worker named Afrazul was brutally beaten up and burnt alive on live camera in Rajsamand, Rajasthan. A Hindu man Shambhu Lal Regar, who committed this heinous crime, was hailed as a hero. His supporters attacked a local court in Rajasthan and hoisted a saffron flag on top of it. Within three days, his supporters had collected Rs 2,75,000 ($3,767). Moreover, on the occasion of a Hindu festival, people made a tableau of Regar and used it in a parade.

In another incident, Alimuddin Ansari was lynched in Jharkhand on June 29, 2017. His killers got bail from the court and Modi’s ministerial colleague, Jayant Sinha garlanded them. In a BBC interview, Sinha even admitted that BJP leaders had provided legal expenses to the accused in the case.

In 2018, an 8-year-old nomadic Muslim girl was raped and brutally killed inside a temple in Kathua, Jammu and Kashmir. The culprits kept her in captivity for several days, sedated her and raped her multiple times and later killed her.

When police arrested some accused in the case, a Hindu Right Wing organization called Hindu Ekta Manch took out a march in support of the accused. The rally was attended by BJP ministers.

BJP leaders not only support these criminals but also deliver anti-Muslim hate speeches to fuel Islamophobia in the country.

For example, in 2016, Anant Kumar Hegde, a BJP leader had said “Islam should be wiped out from this world.”

In the Mahapanchayat (great council) held in Haryana on May 30 to support the alleged killers of a Muslim man Asif Khan, approximately 50,000 people attended the event and several local BJP leaders had also joined it. The council cannot be seen in isolation, as this was not the only event that took place in Mewat in support of the murder accused. Many such small panchayats were held in different villages of Mewat before this Mahapanchayat.

These incidents are enough to expose the deep-seated anti-Muslim hatred prevailing in the majority community of India. The radicalization of the Hindu majority has happened to such an extent that they are openly taking out rallies in support of the people accused of violence against Muslims, and which include rapists and murderers as well.

This radicalized lot is openly calling for the killing of Muslims because they are confident that the government will not take any action against them. These radicalized speakers are aware that the more hatred they will spew against Muslims, the more their popularity will grow among their supporters.

Bhavesh Patel, a convict in Ajmer Dargah Blast 2007, was released on bail in 2018. When he reached his hometown Bharuch, he was a given heroic welcome by a large crowd that included office bearers of BJP and other far-right Hindu outfits.

Pragya Thakur is accused in the Malegaon Bomb blast of 2008. After being released from jail on bail, she contested parliamentary elections on a BJP ticket in 2019 and emerged as a winner by getting 8,66,482 votes. Thakur has confessed on camera that she was involved in Babri mosque demolition in 1992. Yet, this has not mattered for a society where hatred for Muslims is a populist tactic to win elections and wield power.

A year ago, when India was witnessing historical mass protests against the Citizenship Amendment Act (CAA), a few BJP leaders including Kapil Mishra, and their supporters marched on the streets against Muslim protesters and shouted slogans like “Shoot the traitors”.

It is a fact that hate speeches in India always incite people to commit crimes against targeted groups, especially the Muslim minority community. In India, where the polarization of the political sphere has led to a divisive body politic, the otherization of Muslims is key to stay in power.

In another incident last year, a Hindu man Kapil Gujjar fired at Muslims who were protesting against CAA at Shaheen Bagh Delhi. Later on, Kapil was released on bail and joined BJP. Following the outrage, the BJP, however, expelled him.

Few weeks after the shooting incident, anti-Muslim riots took place in North East Delhi in February 2020, in which scores of Muslims were killed and dozens of properties belonging to Muslims were burnt down and many were arrested. However, the leaders who shouted hate-filled slogans and delivered incendiary speeches were never arrested. On the contrary, they became more popular among the masses.

In April 2021, a Hindu priest Narsinghanand organized a press conference where he abused the Prophet of Islam (PBUH). A case was registered against him but he was never arrested. Following the press conference, he became the apple of the eye for Hindu Nationalists. The BJP leader Kapil Mishra raised 4.8 million INR through crowdfunding for Narsinghanand.

Suraj Pal Amu who recently addressed a Mahapanchayat in support of murder accused, has been appointed as spokesperson of BJP. No action has been taken against him yet.

If murder and terror accused are being treated as heroes in a society, then that society can be anything but civilized. Right-wing leaders in India want to spread hated against Muslims because it helps them to gain popularity, and society by and large wants to elect hatemongers because they want to teach a lesson to Muslims.

In the present political landscape of India, the onus of reforming the Hindu society is on the shoulders of well-meaning Hindus who want to defeat this fascism. India needs a social reformer from the majority Hindu community who can deradicalize the Hindu society.