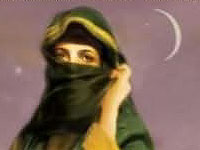 When going through hardships and a tough time remember the story of Hajar عليه السلام, wife of prophet Ibrahim عليه السلام abul ambiya "The Father of Prophets".  Her husband was a prophet and she gave birth to a prophet Ismael عليه السلام.
Her struggle, her taqwa requires constant and sincere reflection.
Lesson one from the story of Hajar عليه السلام is Taqwa.
Imagine standing all alone in a desert with a new born baby in your arms and you have ran out of food and water, all you see is sand as far as your eyes can see.
Visualize that and imagine how scared would you be.

YOU WILL FEEL HOPELESS, WORRIED AND ANXIOUS.
That is how our mother Hajar felt.
Although, regardless of who left her there and why, Hajar knew that Rizq is from Allah, and that Allah would never forsake or abandon her.
That's the message I take from it. That as an amatullah I know for a fact that Allah will never forsake or abandon me as long as I take action and put my trust in Him.
The character of Hajar is what we should aspire to. Her sense of faith and reliance on Allah and her perseverance in what seemed an utterly hopeless situation is the lesson.
She raised her son Ismael عليه السلام, alone in the desert, without any family around and in such a way that Ismael was still obedient to the very father who left him in the desert.
Did she or Ismael throw a fit when Ibrahim عليه السلام showed up years later and said Allah wants me to slaughter you son?
No.

Hajar عليه السلام trusted that Allah would provide, and she sought out that provision.
Today as a result of that call to Allah, billions of Muslims from around the world and across generations commemorate her sunnah of running from safa to marwah while performing Umrah and Allah gave this Ummah the well of zam-zam because of her tawakkul and taqwa in Allah.
These two blessings showcase how immense her tawakkul and yaqeen in her rabb was. Her tawakkul in Allah was so strong that Ibn Abbas  رضي الله عنه comments on the blessing of zamzam and says " May Allah bestow Mercy on Ismaa'eel's mother! Had she left the Zamzam alone Zamzam would have been a stream flowing on the surface of the Earth." - subhanAllah! ❤
✦ Tawakkul is the reason we have Zamzam.
✦ Tawakkul is the reason the dates fell from the tree to feed Maryam عليه السلام during her labour pains, because a pregnant woman in pain cannot shake a tree.
✦ Tawakkul is the reason striking the staff split the sea for Musa عليه السلام.
Let's remember she is our mother. Her example is the best example to emulate. Her trials elevated her. During her lowest points she had the highest level of eeman and faith.
When things get tough, we need to stop whining. Instead focus on duas, ask Allah that he gives you tawfeeq, sabr and tawakkul that is unmatched and doesn't waver.
The second lesson is about being okay with not witnessing your true legacy in this temporary lifetime. So, what do I mean by that? When we talk about legacy, did Hajar  عليه السلام witness her entire legacy in her lifetime?
NO SHE DID NOT.

Hajar عليه السلام had zero idea that billions of Muslims across generations would commemorate her sunnah while performing umrah.
Similarly, don’t worry if your legacy is not visible in a few years or even in your lifetime. If you are sincere and you do good deeds for the sake of Allah alone, Allah will bless you with a good legacy and inshaAllah the fruition, result and reward will be visible be on the day of judgement.
Some legacies are visible in our lifetime and some will inshaAllah be visible on the day of judgment.
Don't limit your idea of legacy.

Just focus on the sincerity of your intentions and perform many good deeds.
🤲 May Allah bless us with tawakkul, ikhlaas, ihsan and unending sadaqaye jariya, may Allah keep us all sincere and steadfast in our affairs – Allahumma ameen.
#TooBlessedToBeStressed