Solution to every problem in this world. POLYGYNY 😂😅 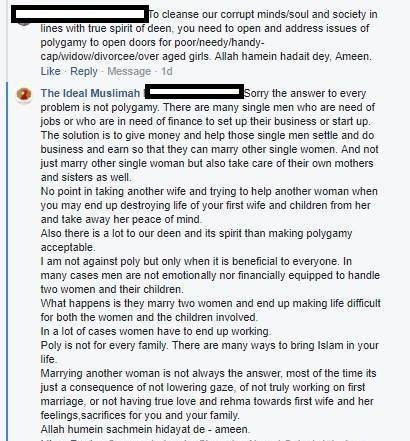 From The Ideal Muslimah Fb page.

Poly the supposed answer for men for everything evil in this world lol
I have been working towards helping poor Muslim women and orphans for past 5 years and when I say this I speak from my personal experience and talking to countless women about their hardships and not based on some report.
And the reason for their state is no education, early marriage, No skill to earn a living, absolute financial dependency on male members, abusive husbands or abusive male family member who failed at being a Qawwam.

Or a good male who is in need of support that is not being provided to him. Since my NGO is geared at helping widows, children and women in general I cannot go ahead and help men.
Aaj kal ke so called mardon ke liye har mushkil ka hal second marriage hogaya hai. And poly seems to be the only way to serve Islam and bring about some magical change.
Even if men have money they do not have the emotional intelligence, rehma or patience. They end up abusing first wife psychologically, physically and with the threat of talaq and literally force her to accept second wife.

99% women are not okay with their husband sleeping with another woman. They would rather give in charity and help a sister in need than have to share their husband and their husband's time.
If you want to save and

serve widowed, single women help them with money and introduce them to other bachelor men.
Don't go ahead and offer yourself, especially when it will break your first wife emotionally and scar her for life with hurt and pain.

Change the mentality of bachelor men and let them marry older, divorced or widowed women.
Disturbed by the idea of men suggesting poly as a solution to everything. Polygyny is not the problem or disagreeable here, the issue is with many emotionally immature men who feel entitled because it's allowed when they can't even manage ONE wife fairly.
Many brothers use spiritual abuse and use the idea of getting another wife as a sort of threat to his present wife (so that she will "fall in line") then he already does not understand enough to manage two households/wives, let alone the one he already has.

BUTTTT The Sunnah is to get married multiple times!
So is serving your family.
So is donating half of your wealth to those in need.
So is helping out in the house.
So is being romantic & attentive to the wife you already have.
So is being tolerant & empathetic not complaining in tougher times to the wife you already have.
So is maintaining good ties with in-laws you already have!
The Quran is the only holy book to state "marry only one" - the explicit condition of polygamy in Islam is to fear injustice between the women involved. That includes hurting the first wife or acting deceitful in order to get a second wife.

The best example, The Prophet ﷺ, was a bachelor who made the habit of marrying divorced and widowed women, only one of his wives - not his first - was a virgin.
Quran doesn't order marrying 4 , it is actually limiting it to 4 , then putting condition of Justice and adding marry only 1.