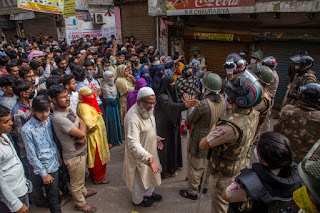 One year on, the anti-CAA movement has receded into the background, its anniversary barely remembered: Delhi police stopped a candlelight march led by students on Dec. 15. In March, the mass protests were cut short by the coronavirus pandemic, but it is hard to say how long they would have survived anyway, given the movement’s vilification by BJP leaders, hostilities from Delhi residents over blocked roads, and the lack of support from India’s so-called secular parties.

The movement has suffered from its own limitations. It failed to engage a larger cross-section of society, building bridges with other distressed communities such as farmers and Dalits, and to counter the BJP’s messaging that it was stirred by Pakistan. The arrests of the anti-CAA movement’s leaders, as well as others who have decried the BJP’s virulent Hindu nationalism, mark the decline of India’s inclusive and consensus-building democratic ethos. Indian Muslims remain in the same precarious situation they found themselves in 2019: living in fear of becoming second-class citizens.

The anti-CAA movement challenged not only the BJP’s Hindu majoritarianism but also the Modi government’s authoritarianism, apparent in its moves to ram through laws such as the CAA or its sudden announcement in 2016 that it would replace certain Indian rupee notes with new ones, causing chaos and lasting economic damage. Using the language of the 1949 constitution, the movement was a tribute to the idea of an India built on secularism and pluralism, an appeal for practicing tolerance.

But it’s clear that the anti-CAA protests did not resonate much beyond an urban, liberal segment of Indian society. Much of the media and the Hindu middle class—the country’s largest demographic—remain solidly behind the prime minister and his politics. Even so, the large numbers of people who joined the movement served as a rude awakening for a leadership confident that it had stamped out dissent. The protests, coupled with a shift in international perceptions, seemed to push Modi’s government to take a step back and soften its tone.

The mothership of the anti-CAA movement was in Shaheen Bagh, a Muslim-majority neighborhood in Delhi. Muslim women led a sit-in there for three months, joined by Muslims and non-Muslims alike. “I sat for 101 days, but no one [from the government] came to meet or speak with us,” said Bilkis Bano, 82, one of the most famous faces of the sit-in. “What could we do when no one came to speak with us?”

Even before the full onset of the pandemic, the anti-CAA movement came to a halt after religious violence ravaged parts of Delhi in February, killing 53 people, mostly Muslims. The students and activists who led the anti-CAA protests—mostly young women and men—were blamed. A Delhi Police investigation, which critics have called biased, concluded that the protests were part of a conspiracy to overthrow the Modi government. In two separate bail hearings for jailed activists, the judges said the terrorism charges were seemingly “targeted” and “vindictive.”

Despite a few political setbacks, the BJP’s brand of Hindu nationalism is gaining strength in the Modi government’s second term.

The arrests of anti-CAA activists and students reflect a narrative that pins blame for the riots on the protesters, and by extension the Muslim community. Delhi police have called activist Umar Khalid, 33—one of the most vocal critics of the Modi government—the “mastermind” behind the Delhi riots. “He has been targeted because he refused to be silenced,” Banojyotsna Lahiri, his partner, said.

Despite a few political setbacks in state elections, the BJP’s brand of Hindu nationalism is gaining strength in the Modi government’s second term. In addition to the passage of the CAA, it has stripped Muslim-majority Jammu and Kashmir of its constitutional autonomy and prompted fears of demographic change in the region. And in November 2019, after decades of litigation, the Supreme Court ruled in favor of building a Hindu temple on the site of a 16th-century mosque destroyed by Hindu extremists in 1992.

The CAA grants citizenship to non-Muslim minority groups from Afghanistan, Pakistan, and Bangladesh. The Modi government maintains that the law won’t affect Indian Muslims. But some fear that coupled with the National Population Register, a data collection exercise, and a proposed National Register of Citizens (NRC) aimed at identifying those living in the country without the proper documents, the CAA will be used to target Muslims who can’t produce documents and strip them of the right to call India home.

One year after the Indian parliament passed the CAA, the Modi government says it is still drafting the rules to enforce it, and the Supreme Court has yet to hear more than 140 petitions challenging its constitutional validity. Home Minister Amit Shah, who has described undocumented immigrants as “termites,” backtracked on the plan for a nationwide citizens’ register last year, after 11 states not governed by the BJP refused to implement it. But while the government may have put the NRC on hold, it has not ruled out implementing data collection, which some argue is a surreptitious way of reintroducing the NRC.

The stripping of Kashmir’s protected status, the passage of the CAA, and the subsequent crackdown on anti-CAA students at two predominantly Muslim universities have offended Islamic countries that are friendly to India. Iran, Turkey, and Malaysia condemned the Delhi riots in February. The Organization of Islamic Cooperation has called on Modi to ensure protection for Muslims and Islamic holy places in India. And after a year of lobbying, Pakistan managed to get the organization to pass a strong statement on Kashmir.

India’s CAA push has even put off friendly Bangladesh, which has refused to accept the return of any Indian residents left out of the NRC. Prime Minister Sheikh Hasina has called the CAA unnecessary, and three of her ministers canceled trips to India amid the protests. The Modi government will likely tread forward carefully, given that Islamophobia in India has become somewhat of a liability—and could be a thorny issue with U.S. President-elect Joe Biden.

With state elections due next year in both Assam and Bengal, the BJP is now letting the CAA issue simmer.

The issue is already playing out in Assam state, home to many Bengali-speaking Hindus and Muslims who have immigrated from Bangladesh over many years. The state government prepared a list of citizens in August 2019. But the BJP suffered a setback: Of the 1.9 million people found to be living in Assam without documents, over 500,000 were Hindus who would effectively have to claim they fled religious persecution in a neighboring country to gain their citizenship. BJP leaders have said that Hindus left out of the NRC would be covered under the CAA, and Shah said last year that the NRC would be repeated in Assam. This month, the Assam government said that the list it had declared final in 2019 was not final after all.

With state elections due next year in both Assam and Bengal, the BJP is now letting the CAA issue simmer. In Assam, the BJP’s attempt to make the NRC a Hindu-Muslim issue—rather than one tied to local differences in language and ethnicity—hasn’t quite worked. Winning Bengal, which also has a sizable population of immigrants from Bangladesh, would be a milestone for the Hindu right wing. There, the BJP has tapped into Hindu conservatism dormant among upper-caste communities and worked hard to polarize the base of Chief Minister Mamata Banerjee, who took power after three decades of Communist Party rule in 2011.

“The BJP is in a legal bind when it comes to Assam. But wherever there is some space in the communal game, they are playing it,” said Sangeeta Barooah Pisharoty, the author of Assam: The Accord, The Discord.

In the anti-CAA movement, progressive forces couched their pleas to uphold the rights and freedoms of minority groups as a call to defend the constitution. They now recognize the BJP government’s unwillingness to even pay lip service to India’s constitutional values—and the not-so-silent majority’s antagonism toward these calls.