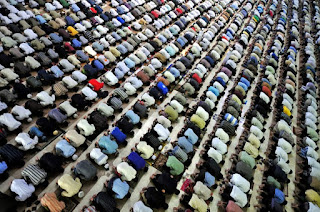 Sitting at his dining room table, Artemis Rivera said the words “There is no God but Allah, and Muhammad is the messenger of Allah” in Arabic as he recited the Islamic profession of faith known as the shahada on a Zoom call during his mosque’s online Friday service. He felt a sense of peace, he said, as he became a Muslim in front of the virtual congregation.

Taking the shahada and converting last April, as the coronavirus pandemic began to spread quickly, was the right time for the 25-year-old from Cedar Rapids, Iowa.

“Everyone around us is, like, dying, so you want to make sure that you have faith settled, like with God before anything were to happen,” Rivera said. “There’s that feeling of, like, ‘Hey, I need to make sure that this [converting] is actually happening.’ ”


Conversion in Islam is a simple process in which a person says the testimony of faith with witnesses present. It’s typically done at a mosque in front of a large gathering, with hugs and well wishes from the congregation afterward.

But with mosques closed and people practicing social distancing, recent and longtime converts are embracing a new normal, doing virtual conversions and finding Muslim communities online to help them navigate their spiritual path.

Giving shahadas online has been rare in the past. Imam Omar Suleiman, founder and director of the Yaqeen Institute for Islamic Research, has done them pre-pandemic for converts in remote locations or for those who fear their families finding out about their conversion.


“Coming to the masjid [mosque] to take shahada is part of entering into the community and has a ceremonial element to it, with the people celebrating with takbir [praise] and hugs,” Suleiman said. “I would worry that if online shahadas become the norm, [converts] will even more easily disappear. So, like with other rituals, it’s suboptimal but better than nothing.”

Online services have mostly been used for national Islamic organizations to connect with Muslims nationwide. Since the pandemic began, those programs have expanded, and local mosques have started streaming their services.

Spiritual services are important for Muslims in general but sometimes more so for converts who did not grow up with Islamic practices and rely on community guidance. The increase in online resources has helped them further their connection to Allah and the Muslim community.


Converts often refer to themselves as “reverts,” believing that people are born Muslim, but eventually make their way back to Islam when they take their shahada.

Rivera started his journey back to Islam in 2017 when he took a history of theology class in college. He read the Koran for the first time in that class and said he felt an “all-over kind of peace” in his soul.

“I knew I was, like, on the right path and heading in the right direction and doing what I was supposed to be doing,” Rivera said.

Rivera, who identifies as queer, visited his local mosque a few times before the pandemic but found it to be “a very gendered and inaccessible space.” He found Masjid al-Rabia, a Chicago queer-oriented mosque, on Twitter earlier this year when he was searching for fellow queer Muslims to follow.

But because Rivera lives in Iowa, he had no way to attend services at the mosque until it made streaming available at the beginning of the year. The day he said his shahada was his first time attending the mosque’s online service.


“I love that Masjid al-Rabia centers both on queer and disabled Muslims in the services they provide,” Rivera said.

The Yaqeen Institute saw an increase in conversions this year as the spiritual presence online grew with the increase of resources and viewership, Suleiman said.

About 22 people converted via Zoom with the institute since the beginning of the pandemic. About 10 converted during Ramadan, which was observed this year from April 23 to May 23, compared to previous years when about two or three converted at his local mosque.

“You have a lot of people that otherwise would have maybe gone to a local masjid and ask some questions that were just sort of online and ended up being a part of that online community,” Suleiman said. “And so it kind of became a trend where someone says I’ve been following along and I wanted to convert to Islam as well.”

Jordan Pearson, who lives in Boston, is one of the 22 who converted with the Yaqeen Institute. He had planned to take his shahada at his local mosque, but it was closed because of the pandemic. Instead, he opted to say his shahada online.

The 26-year-old grew up in a Christian household and had a lot of questions about faith and religion in general. He was introduced to Islam when he moved from South Carolina to Boston in 2018 and met a friend who answered those questions.

He was inspired to research and learn more about the religion when his friend mentioned prominent Black Muslims such as Muhammad Ali, Malcolm X and Mansa Musa, a 14th-century West African ruler thought to be the wealthiest person of all time. He decided to convert during Black History Month after he saw a video from the Yaqeen Institute.

As he sat in his bedroom, he took his shahada with Suleiman and his friend over Zoom in May.

“They embraced me, and it was amazing,” Pearson said. “It was kind of surreal for a couple of days that I'm Muslim.”

Yusef Brebner converted last September in a traditional ceremony at his local mosque after having long conversations with the imam there.

The 16-year-old from Durham, N.C., skipped school to take his shahada during Friday prayers in front of 80 or so people at the mosque. Afterward, he was welcomed with hugs and congratulations from “uncles at the masjid,” which he said made it all “really affirming and validating.”

But with the mosque now closed because of the pandemic, he has been able to stay connected to fellow Muslims through online services and study groups.

The Muslim community can be a “found family,” as Brebner puts it, for converts who may not have the support of their relatives. Brebner has his immediate family’s support but knows not everyone does.


During his first Ramadan, Brebner got involved with an online group in which he was able to finish reading the Koran and attended Zoom calls where they discussed the different chapters. He was even able to witness a Zoom conversion and virtually be there for a fellow convert.

“I’d say that was definitely the best part of Ramadan, that I was able to connect virtually with a Muslim community that I was not necessarily able to if it had not been for the pandemic,” Brebner said.