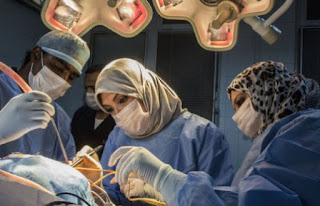 Being “visibly Muslim”, such as wearing a hijab or having a long beard, made it more likely for Muslim NHS workers to face Islamophobia. One woman said she stopped wearing the hijab as it was “like wearing a sign saying ‘kick me’.”

Meanwhile, alcohol – forbidden in Islam – has been described as a “social glue” in the NHS, with many Muslims believing they have missed out on career and bonding opportunities because socialising outside work revolves around drink.

And while there are many incidents of outright bullying and harassment, it is the subtle, more difficult to prove Islamophobia within the NHS that is the “most dangerous discrimination”, say Muslim healthcare workers.

A staggering 43% admitted they had considered leaving the NHS because of Islamophobia.

Our survey conducted in conjunction with BIMA had 133 respondents from all over the country working in various NHS roles including consultants, surgeons, GPs, pharmacists and medical students.

One Muslim NHS worker said: “I think Islamophobia has increased in society at large and this is reflected in the NHS.”

Dr Salman Waqar, general secretary at BIMA, told HuffPost UK: “It reflects a wider societal unease about religion and the way spirituality and belief is seen as a problem.

“Some Muslims will not make a fuss because of fear of retribution. But making small compromises causes turbulence and unease internally.

“This creates a sense of not belonging for Muslims in the NHS and biological weathering. They feel they have to put on their uniform, turn up for work and justify their existence to colleagues.”

Dr Hina J Shahid, chair of the Muslim Doctors Association, said: “We see people celebrating diversity in all its forms in the NHS – but people generally don’t want to talk about religion. It is like a taboo subject.

“Belonging to a religious group is almost seen as going against the scientific nature of being a doctor.”

“In the NHS, you realise there’s something about the hijab that really riles people,” says Kiran Rahim, a paediatric registrar in London. “People make assumptions about you. When people first see me, they presume I don’t speak English, or I have an accent.”

She says judgements are made about women in hijabs and she is asked questions by colleagues like: “Does your husband make you wear that?” and “Do you wear your hijab when you shower?”

“I would expect people I work with to be more clued up. I am as British as they come, but my religion is part of my identity.”

Muslim women told HuffPost UK they were often perceived to be less educated due to wearing headscarves, and received backhanded compliments such as surprise at how well they spoke English – even when they were born and raised in the UK.

Zineb Mehbali, 32, a registrar in obstetrics and gynaecology, believes a culture exists within the NHS where people are discriminated against for being different.

She wears a hijab and experienced overt Islamophobia at one hospital when her locker was vandalised and had the word “hijab” scrawled across it.

“I’m quite resilient, but there have been situations where I’ve cried at work,” she said. “When my locker was vandalised for being Muslim, it made me feel vulnerable but also very hurt as I knew a colleague had done that.”

Email ThisBlogThis!Share to TwitterShare to FacebookShare to Pinterest
Labels: Combating Islamophobia, Islam in the UK