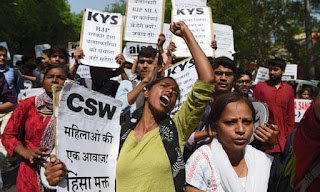 A spate of brutal rapes and murders of young girls in a single district of India over the past month has provoked outrage and exposed the ongoing use of sexual violence as a tool of oppression and revenge against lower caste communities.

Over the past month, the Lakhimpur Kheri district of the Indian state of Uttar Pradesh has witnessed four incidents of girls being raped and brutally murdered. At least two of the girls were Dalits, the lowest caste in the Hindu system of social hierarchy, who were previously referred to as “untouchables” and cast out from society.

Last week, a 14-year-old girl Dalit girl was found hanging from a tree in a village, having been raped and murdered. Just a few days before, a three-year-old girl was raped and strangled to death.

“These cases of extreme sexual violence are more examples of the dominant caste wielding power over Dalit women who are perceived as weak and vulnerable and available,” said Manjula Pradeep, director of campaigns at the Dalit Human Rights Defenders Network.

She added: “Dalit women are seen as impure and deprived when they access basic amenities but their bodies are also used as objects to take revenge on the Dalit communities and keep them oppressed. With more Dalits demanding their rights, these kinds of incidents we have seen in Lakhimpur Kheri are increasing.”

Local activists said the assaults carried out against the Dalit girls went ignored by police until the issue was raised by activists and members of the opposition political party, who said the incident of the 13-year-old had “shaken humanity”. Activists have also struggled to enter the village to intervene in the cases as upper caste members of the village had reportedly blocked access.

The state of Uttar Pradesh already has the highest number of reported cases of violence against Dalits but during coronavirus lockdown there was a reported spike of attacks on Dalits by upper caste Thakurs. However, no arrests have been made.

“The recent spate of rape and murder cases in the Lakhimpur Kheri district indicates an endemic problem of sexual violence and the state government needs to do much more to address this crisis,” said Divya Srinivasan, a south Asia consultant for women’s rights organisation Equality Now.

“In many instances, sexual violence committed against Dalit women and girls is perpetrated by men from dominant ‘upper castes’, who use sexual violence as a tool to assert power and reinforce existing caste, social and gender hierarchies,” said Srinivasan.

Srinivasan emphasised that these entrenched hierarchies of power gave attackers of Dalit women a worrying sense of impunity. Assaults on lower caste women were rarely investigated or prosecuted, and in the case of Dalit victims, rarely prompt much media coverage or public outrage.

India remains the most unsafe country for women in the world, with a woman raped every 20 minutes. Lower caste women in particular bear the brunt, with little to no access to justice. It first came to light in a 1999 report by Human Rights Watch that documented how Dalit women in Bihar were raped and then had their breasts cut off and were shot in the vulva.

Official statistics show that at least four Dalit women are raped in India every day, though the real number is thought to be much higher as the communities often do not report the rapes due to pressure from higher castes or because police refuse to file the cases.

An upcoming joint report by Equality Now and Swabhiman Society found that Dalit women are subjected to more severe or aggravated forms of sexual violence, such as gang-rapes or rape with murder.

The issue of sexual violence has become more prominent in recent years, particularly following the 2012 Delhi bus gang-rape case, and again last year after the brutal gang-rape of a vet in Hyderabad. Despite harsher punishments introduced for sexual violence, reports of rape and assault continue to rise.